One Hour of Exercise a Day Fights Damage of Sitting

Update Required To play the media you will need to either update your browser to a recent version or update your Flash plugin.
By Anna Matteo
15 August, 2016

When it comes to your health, It seems that sitting too much may be as bad for you as smoking.

If you sit for many hours a day in a traditional office job, you may be interested in a new study. This study suggests that you should get an hour of "brisk exercise" every day.

Researchers say this brisk exercise can help office workers reduce their risk of an early death. Many office workers spend a large part of their time seated and physically inactive.

A lack of physical activity is linked to some 5.3 million deaths worldwide each year. The researchers say that makes a sedentary lifestyle more deadly than smoking.

The new report said that a sedentary lifestyle can cause many diseases, including heart disease, diabetes and even some cancers. These diseases cost the world economy $67.5 billion every year.

The U.S. Centers for Disease Control and Prevention suggests adults get 150 minutes of moderate aerobic exercise every week. In addition, CDC officials advise adults to get an additional two hours of muscle strengthening per week. 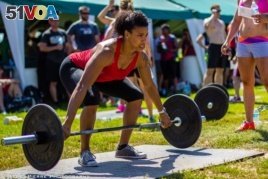 Ulf Ekelund is with the Norwegian School of Sports Sciences and the University of Cambridge. He was the lead writer of the report.

Ekelund says that "For many people who commute to work and have office-based jobs, there is no way to escape sitting for prolonged periods of time."

He says he and the other researchers "cannot stress enough" the importance of getting exercise. Ekelund suggests going for a run in the morning, riding a bicycle to work, or taking a walk in the middle of the work day.

An hour of physical activity is "ideal," he adds. But if this is not possible, he suggests doing at least some exercise each day to reduce the risk of disease and an early death.

For the study, researchers looked at 13 earlier studies on the effect of inactivity. Study subjects were grouped according to the amount of activity they reported. The range of activity reported varied greatly -- from less than 5 minutes a day to up to 75 minutes a day.

The study found that those who sat for eight hours a day, but got the suggested amount of exercise reduced their chances of dying at an early age. These people did better than those who sat less but were not active.

Ekelund says, "There has been a lot of concern about the health risks" linked "with today's more sedentary lifestyles." He says the message from his team is a positive one: it is possible to reduce, or even eliminate, these risks if we are active enough," even without taking up sports or going to the gym."

A report on the study appeared in the publication Lancet.

VOANews.com reported on this story. Anna Matteo adapted the report for Learning English. George Grow was the editor.

offset – v. to cancel or reduce the effect of (something) : to create an equal balance between two things

prolong – v. to make (something) last or continue for a longer time

range – n. a sequence, series, or scale between limits (a wide range of patterns) : the limits of a series : the distance or extent between possible extremes

varied – adj. having many forms or types : including many different things

positive – adj. thinking about the good qualities of someone or something : thinking that a good result will happen : hopeful or optimistic