Update Required To play the media you will need to either update your browser to a recent version or update your Flash plugin.
By Anna Matteo
10 October, 2016

Roller coasters are fast and exciting. But passing a painful kidney stone is not. The process is painful and can take a long time.

But American researchers have found that a roller coaster ride just might help those suffering from a kidney stone. They say such rides help patients pass the stones with a 70 percent success rate. 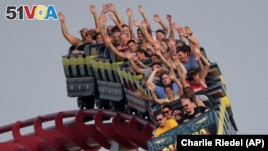 The findings come from researchers at Michigan State University. They published their findings in The Journal of the American Osteopathic Association.

David Wartinger led the study. He says he became curious after hearing many stories of people who passed kidney stones after going on a fun ride at a theme park in Florida.

Patients told him that after riding a "roller coaster at Walt Disney World, they were able to pass their kidney stones." One man even said he passed three different stones after going on the ride more than once!

To test whether the claims were true, Wartinger used a 3-dimensional model of a hollow kidney. Inside the model he placed three kidney stones, each no larger than 4 millimeters.

Then he placed the man-made kidney into a backpack. The researchers put the kidney on Disney's Big Thunder Mountain roller coaster for 20 rides.

There are many variables

Wartinger found that where the person sits on the roller coaster can make a big difference.

He said "in the pilot study, sitting in the last car of the roller coaster showed about a 64 percent passage rate." Sitting in the first few cars only had a 16 percent success rate.

Researchers decided to expand the study. They rode the same roller coaster with several kidney models. When sitting in the back car, the success rate of passing the stones was 70 percent.

Another variable – it depends what kind of roller coaster. When it comes to passing kidney stones, not all roller coasters are equal.

The researchers used 174 kidney stones of differing "shapes, sizes and weights to see if each model worked on the same ride and on two other roller coasters."

They found that "Big Thunder Mountain was the only one that worked." The other two roller coasters both failed the test.

Wartinger said the other rides were "too fast and too violent." The movement forced the stones against the side of the kidney. He said that the ideal roller coaster is rough and quick with some twists and turns.

How common are kidney stones?

About 300,000 people in the United States go to hospital emergency rooms with kidney stones each year.

One common treatment for kidney stones -- called lithotripsy -- breaks up larger stones into smaller ones. But Wartinger said the treatment can leave many smaller stones. To solve this problem, he suggested riding a roller coaster "after a treatment when the remnants are still small."

Wartinger thinks roller coaster rides could also be used as a preventative measure. He said that a yearly ride on a roller coaster could even prevent stones from developing.

"You need to heed the warnings before going on a roller coaster," he said. "If you have a kidney stone, but are otherwise healthy and meet the requirements of the ride, patients should try it."

He adds that it's "definitely a lower cost alternative" to other treatments.

And riding a roller coaster is definitely more fun!

VOANews reported on this story. Anna Matteo adapted the story for Learning English. George Grow was the editor.

curious – adj. having a desire to learn or know more about something or someone

theme park – n. an amusement park where the rides and attractions are based on a particular theme

3-dimensional – adj. An object that has height, width and depth, like any object in the real world.

hollow – adj. having nothing inside : not solid

pilot – adj. done as a test to see if a larger program, study, etc., should be done

remnant – n. the part of something that is left when the other parts are gone