Update Required To play the media you will need to either update your browser to a recent version or update your Flash plugin.
By VOA
29 June, 2012

This week, the United States Supreme Court ruled that the government can require people to have health insurance or pay a financial penalty. Thursday's decision came on a vote of five to four and represented a major victory for President Obama.

In twenty-ten, he pushed Congress to pass the Patient Protection and Affordable Care Act against opposition by Republicans. A major part of the law is known as the individual mandate. Starting in twenty-fourteen, most Americans will have to get insurance coverage or pay a yearly penalty. 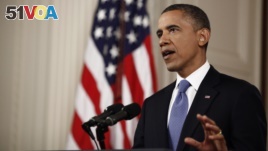 President Barack Obama speaks in the East Room of the White House in Washington, June 28, 2012, after the Supreme Court ruled on his health care legislation
Most court watchers had expected the ruling to center on the question of whether or not the penalty was constitutional under the Commerce Clause. This part of the Constitution gives Congress the power to regulate business between states. Opponents of the health care law argued that the clause does not give Congress the power to require people to buy a product.

The court majority agreed. However, Chief Justice John Roberts used a different part of the Constitution to find that the mandate is legal: Even though the law never calls the penalty a "tax," it acts like one and Congress has the power to tax.

The four dissenting justices argued in a joint opinion that the entire law is unconstitutional.

President Obama called the ruling a victory for all Americans.

BARACK OBAMA: "Whatever the politics, today's decision was a victory for people all over this country, whose lives will be more secure because of this law and the Supreme Court's decision to uphold it."

Most Americans buy health insurance through their employers. The law aims to provide insurance to about thirty million more people who are not covered through a job. The poor are covered by Medicaid, a joint federal and state program.

The health care law requires states to establish online marketplaces called exchanges. These are for individuals and small businesses to shop for health plans -- in some cases, with tax credits to help people pay for them.

The law contains several provisions with strong public support. One bars insurance companies from denying coverage to people with pre-existing health conditions. Another bars lifetime limits on coverage payments. The law also allows young people to stay on their parents' insurance plans until the age of twenty-six.

Chief Justice Roberts wrote the majority opinion for the court and was the deciding vote. He sided with the four more liberal members of the court. This came as a surprise. The chief justice is generally conservative, and conservatives hotly oppose the individual mandate.

Republicans control the House of Representatives. They plan to hold a vote on July eleventh to repeal the law. However, Democrats hold the majority in the Senate and would never agree.

MITT ROMNEY: "What the court did not do on its last day in session, I will do on my first day if elected president of the United States, and that is I will act to repeal Obamacare."

Mr. Romney approved a similar health care law when he was governor of Massachusetts. But he argues that such decisions should be left to the states.