WHO: Environmental Pollution Kills Millions of Children Every Year

Update Required To play the media you will need to either update your browser to a recent version or update your Flash plugin.
By Anna Matteo
27 March, 2017

Environmental pollution kills 1.7 million children under the age of five every year worldwide. This is according to the World Health Organization (WHO). The WHO warns that child deaths will increase greatly if pollution continues to worsen.

Dr. Margaret Chan is the WHO Director-General. In a press release statement, Chan said, "A polluted environment is a deadly one – particularly for young children."

She explains that "their developing organs and immune systems, and smaller bodies and airways, make them especially vulnerable to dirty air and water."

The most common causes of death among children aged one month to five years are diarrhea, malaria and pneumonia. This is according to the WHO. The organization also says reducing environmental risks can prevent such deaths. This means providing access to safe water and sanitation, limiting exposure to dangerous chemicals, and improving waste management.

Experts say air pollution is the most dangerous

However, of all the environmental pollutants, air pollution is being called the most dangerous.

The WHO estimates that air pollution is responsible for about 6.5 million premature, or early, deaths every year. That number includes nearly 600,000 deaths of children under age five.

Most of these deaths take place in developing countries.

However, WHO environment and health chief Maria Neira tells VOA that air pollution is a leveler between rich and poor. Everybody, she says, needs to breathe. 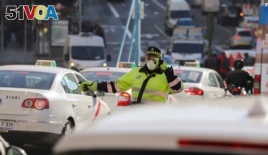 Due to air pollution in Madrid, a traffic policeman wears a mask while directing traffic, Dec. 29, 2016.

"You can be a very rich child, your parents very rich, but living in a place, in a city, which is very polluted. Then there is very little you can do because we all need to breathe. So, even if you are rich or poor, you still need to breathe and this is very pernicious. Air pollution is everywhere."

Neira says one of the most important ways to reduce air pollution is to produce cleaner fuels for cooking and heating.

"Almost half of the world population is using dirty fuels for cooking, heating, and lighting at home. And, this is affecting very much mothers who are staying and cooking at home, but the children who are around mothers—they are exposed as well."

Cleaning up how the world cooks, heats and lights homes and other buildings is a big-picture goal. The WHO is advising government departments and industries such as construction and the health sector to work together to clean up their environment.

But what about the here and now? What can individuals do to limit our family's exposure to air pollution?

The U.S. Environmental Protection Agency has the following suggestions:

Some of these suggestions, however, may not work for some people -- for example:

Therefore, the WHO stresses that governments around the world need to take the lead on ensuring that children grow up in a clean environment.

Look for follow-up articles here at the Health & Lifestyle report on other ways you can protect yourself and your family against environmental pollutants.

Lisa Schlein reported for VOA from Geneva at the launch of two WHO reports dealing with the effect of harmful environments on children's health. Anna Matteo adapted this story for Learning English, adding addition reporting from several websites. George Grow editor the story.

vulnerable – adj. capable of being physically or emotionally wounded

pernicious – adj. causing great harm or damage often in a way that is not easily seen or noticed

leveler – n. something that treats or affects all people the same way