Health experts are warning the world to prepare for a major pandemic. But the experts say they just do not know when it will strike. 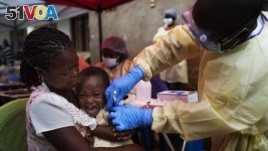 In this Saturday, July 13, 2019 photo, a child is vaccinated against Ebola in Beni, Congo. But after nearly a year and some 171,000 doses given, the epidemic shows few signs of waning. (AP Photo/Jerome Delay)

The group said the next pandemic could move around the world in as little as 36 hours. It said the disease could kill up to 80 million people and cause serious economic losses.

The group is called the Global Preparedness Monitoring Board. It operates independently of the World Health Organization and the World Bank. The board was set up last year to prepare a yearly report on the possibility of a pandemic. The first report was frightening.

Lack of medical care a threat

The group notes improvements in medicine over the years. But it adds that politics and social issues keep people in both rich and poor countries from much needed medical care. And it says this threatens the whole world.

The report praises modern medicine. Years ago, individuals found to have the disease AIDS were guaranteed a horrible death, but now treatment has changed that. Research on an AIDS vaccine is promising.

There is even talk of possibly ending malaria. Currently, the disease kills 500,000 people each year, most of them children.

Scientists are learning how to fight Ebola Virus Disease. A vaccine and two new drugs to treat those infected are saving lives in the Democratic Republic of Congo. Until recently, Ebola killed up to 90 percent of its victims. Now, the death rate is more like 10 percent.

Doctor Anthony Fauci is with the U.S. National Institutes of Health and a member of the board. He says with a low viral load, someone infected with the Ebola virus now has a 90% chance of surviving.

The report is meant for political leaders around the world. One of the board's co-chairs is both a doctor and a politician. Gro Harlem Brundtland is a former prime minister of Norway and a former head of the World Health Organization. She likens health security to a military threat that requires the whole government to act together.

"There has to be the same in global health security," Brundtland said.

Fauci recently returned to the United States from an overseas trip. He went to East Africa to study efforts for treating Ebola patients in the Democratic Republic of Congo.

"I was clearly impressed at the...Congolese who are administering the care here, as well as the preparedness of the Rwandans and the Ugandans, in case Ebola cases go over the border," Fauci said.

The board noted the stigma of Ebola as a problem that makes it more difficult to stop the spread of the disease. Diseases like tuberculosis, HIV/AIDS, Ebola and others carry such a great stigma that those who get the disease often fail to seek treatment. Political leaders can create policies to remove stigmas, the board said.

The report said that poverty, lack of clean water and sanitation are all to blame for the spread of infectious disease. It added that political leaders can set aside money to clean up polluted water and improve cleanliness.

"We need to have a stronger preparedness to avoid unnecessary loss of life and large economic losses," warned Brundtland.

The Global Preparedness Monitoring Board also said conflict between nations and forced migration both increase the likelihood of diseases spreading. It urged countries to establish emergency preparedness from the local level on up, to build trust and to work to improve the way medical experts react to serious health threats.

That would help ensure the health of the world's 7.7 billion people.

pandemic – n. an event in which a disease spreads very quickly and affects numbers of people over a wide area

monitor – v. to observe or study the progress or quality of something

impress – v. to cause (someone) to feel respect or interest

stigma – n. a mark of dishonor linked to an event, person or quality; a series of unfounded ideas or beliefs that a society or group of people has about something

migration – n. the movement of people to a new area in order to find work or better living conditions