One Method for Controlling Emotions, Stress

Update Required To play the media you will need to either update your browser to a recent version or update your Flash plugin.
By Anna Matteo
30 October, 2017

Fear, anger, hate and sadness: These are four emotions that can affect how we think and how we act.

When we are under pressure -- mental or physical -- our emotions are even more difficult to control. But what if there was a quick and easy plan for dealing with your emotions every time you faced a stressful situation?

Well, there may be such a plan. And it involves a grammatical term: third person singular. Teachers use this term when talking about verbs and the form they take with the third person pronouns "he," "she" or "it."

Now, an American researcher thinks he may have found a way to help control stress: talk to yourself in the third-person.

Jason Moser is a clinical psychologist and neuroscientist. He serves as an associate professor of psychology at Michigan State University.

Moser says that talking to yourself in the third-person seems to put a kind of psychological distance between you and your emotions. He thinks this distance is all some people need to control how they react to stress.

"'Jason' doesn't just refer to myself. ‘Jason' is the name of lots of other Jasons I've met before, and it has many other references. Whereas, ‘I' and ‘me' can only refer to the self, Jason can refer to others. And I think that distance from the self towards others gives people different perspectives. It allows them to manage stress better."

Talking to yourself in the third-person is like giving yourself advice. Moser uses himself in an example. He does not like flying, but he must fly often for his work. So, when he is feeling nervous or afraid during a flight, he talks to himself -- only silently.

"And what I find myself doing, if I use third-person self-talk, is that I then start kind of giving myself advice. I start saying, ‘Well, you know, Jason knows air travel is very safe. And Jason's been on thousands of flights before with no issue.' And so this little bit of psychological distance you gain by using your own name – it's almost as if you're giving advice to somebody else even though it really does end up being you you're giving advice to."

Moser admits that talking out loud to yourself could look and sound strange to other people. So, he suggests using your brain and having that discussion inside your head. Thinking through that dialogue enables you to use this strategy anytime, anywhere. 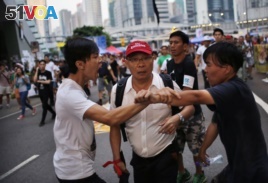 This strategy is easy and quick

Moser's research came from his desire as a mental health expert to help patients. Moser felt helpless when his patients were unable to use strategies he would suggest to them. He wanted to find a method that people could easily use to control their emotions.

"I'm looking for easy and quick strategies people can use to manage negative emotions. In doing therapy with my clients one of the things that's really frustrating is that many times it's hard to get clients to adopt strategies you want them to adopt. And in large part because they're difficult. And they're not exactly easy or intuitive in the moment."

Moser says that simply telling people suffering from depression to think differently is not enough. Brain imaging tests show that it takes great effort for these people to change their way of thinking.

"And when you ask people who are anxious or depressed, for instance, to do that -- you see that it's really difficult for them to do that. Their brain activity show you that it's effortful for them. And so, I'm always looking for something that's easier and quicker for people to do in the moment."

Moser performed two experiments with other researchers at Michigan State University and psychologists at the University of Michigan. He says they used two kinds of stimuli and looked at brain activity in the participants using two different imaging techniques.

"Yeah, so, our main goal with these two studies was to show that third-person self-talk can be an effortless form of emotion regulation."

In the first study, Moser and his team showed the test subjects troubling pictures. They asked them to think about the pictures, using either first-person pronouns or third-person self-talk. Then the researchers examined the brain activity of both groups using an electroencephalogram or EEG. This is a test that recognizes electrical activity in a person's brain.

In the second study, researchers asked the subjects to think of difficult memories, again using both first-person pronouns or third-person self-talk. But this time, they looked at the brain activity with a different kind of technology, fMRI.

Moser says that in both studies, the subjects who used third-person self-talk had a big reduction of emotional response in brain wave activity. The two tests also showed that these participants did not experience higher activity in other parts of the brain.

Moser says this shows that the strategy needs no additional effort and happens without any thought or effort.

"They had reduced emotional experiences but no extra effort or extra processing somewhere else in the brain. It seemed to be automatic and effortless."

Moser says he and his team used both imaging tests to give a more complete picture of how the brain reacts to third-person self-talk. EEG measures electrical activity during a short period of time. And fMRI measures blood flow over a longer period.

The researchers decided to use two different stimuli in the separate studies for the same reason. One study looked at the strategy used on immediate reactions to a troubling picture. The other study explored the effect of third-person self-talk on bad memories.

"In the EEG, we showed them pictures and wanted to see, 'Can they use third-person self-talk in the moment?' Whereas in the fMRI scanner we wanted to see, "Can we get the same sort of effect using memories about the past?' "

Moser says this provides a strong case that third-person self-talk is an effective way to control emotions in any situation.

He says the most exciting thing he learned from this research is that third-person self-talk is effortless. The brain imaging shows it does not require any added effort, planning or thinking. And people can use it when dealing with immediate stress or when dealing with painful memories that have long since passed.

"This is not hard to do. People can do this and they can do it quickly within the first second of seeing an emotional picture. And they can do it reflecting back on painful experiences. And that it's really easy and quick to do. And that was really, I think, the kinda main point that we wanted to make with these studies."

Who shouldn't use this technique?

Moser warns that this strategy may not be good for everyone. People with a severe mental disorder and who already have too much distance from their feelings should probably not use third-person self-talk. But he believes most other people can use the technique when dealing with stress, depression, anxiety or anger.

Moser admits that the strategy does have its share of critics in the world of psychology. He notes that some may call third-person self-talk silly.

However, he adds that this strategy for controlling stress and emotion is not new, but the research is. With the information he and his colleagues have collected, third-person self-talk may be used by more people and in more situations.

grammatical – adj. of or relating to grammar : grammar – n. the set of rules that explain how words are used in a language

neuroscientist – n. one who studies the nerves and especially of how nerves affect learning and behavior

strategy – n. a plan or method for achieving a particular goal usually over a long period of time

adopt – v. to begin to use or have (a different manner, method, etc.)

anxious – adj. afraid or nervous especially about what may happen : feeling anxiety

stimuli – n. something that causes a change or a reaction : an influence that acts usually from outside the body to partly change bodily activity (as by exciting a receptor or sense organ)

regulation – n. the act of regulating something : regulate – v. to set or adjust the amount, degree, or rate of (something)

silly – adj. having or showing a lack of thought, understanding, or good judgment : foolish or stupid : not serious, meaningful, or important