Flu Virus Can Be Deadlier Than War

Update Required To play the media you will need to either update your browser to a recent version or update your Flash plugin.
By VOA
04 December, 2017

The year 2018 will mark the 100th anniversary of the deadliest influenza outbreak in history.

Scientists estimate that the influenza pandemic of 1918 killed more than 50 million people around the world. Other estimates go much higher. Because of a lack of medical record-keeping, we may never know the exact number. 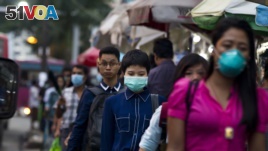 However, the outbreak was a global disaster, killing more people than World War I.

In the United States, historians at the National Archives state that the "flu afflicted over 25 percent of the U.S. population. In one year, the average life expectancy in the United States dropped by 12 years."

It was a fast killer. Again, archival records state that some "victims died within hours of their first symptoms." Others died after a few days. "Their lungs filled with fluid and they suffocated to death."

The 1918 flu pandemic was also different from other outbreaks. It struck many healthy, young people. Viruses usually affect sick or old people.

Scientists now say they know why.

In 1918, people born after 1889 were most at risk because they had not been exposed to an earlier virus as children. This exposure would have protected them somewhat from the 1918 flu.

Although modern medicine effectively controls many diseases, influenza remains difficult to protect against. The World Health Organization estimates that every year influenza kills 250,000 to 500,000 people around the world.

Each year, medical scientists develop flu vaccines. But they can only guess which strain of the virus will spread.

The Centers for Disease Control and Prevention in the United States notes on its website that: "flu viruses are constantly changing – they can change from one season to the next or they can even change within the course of one flu season."

Flu vaccines offer immunity from a limited number of influenza viruses and often do not protect against new forms of the virus.

The CDC adds that the effectiveness of a flu vaccine can be very different from year to year. The CDC says recent studies show that "flu vaccination reduces the risk of flu illness by between 40% and 60% among the overall population." However, this only happens "...during seasons when most circulating flu viruses are well-matched to the flu vaccine."

Still worth getting a flu shot, but...

Anthony Fauci is the Director of the National Institute of Allergy and Infectious Diseases in the United States. He says the effectiveness, or efficacy, of flu vaccines makes it worth getting vaccinated. But he says we need a better vaccine.

"Even on a good year the overall efficacy of an influenza vaccine is about 60 percent so even though it is always better to get vaccinated against influenza than it is not to get vaccinated, no doubt about that, we need to get a better vaccine."

Vaccine makers are also concerned with the low rate of effectiveness for flu vaccines.

"The disease we are trying to prevent is very prevalent. Up to 20 percent of us will have an influenza infection during the course of a year."

Will there be another deadly flu pandemic?

Health officials remain concerned about another flu pandemic. New strains of the flu virus appear regularly. One example was the "swine flu" or H1N1 outbreak in 2009. Fauci says that virus caused a true pandemic.

"Certainly we've had a flu pandemic in 2009, the H1N1 "swine flu," that was not a serious epidemic in the sense of a lot of deaths. It was a pandemic to be sure because it was a relatively new virus that was widespread infection throughout the world."

However, outbreaks do not affect all parts of the world equally. Vaughn notes that pandemics hit the developing world harder because of low vaccination rates.

"Most influenza deaths occur in developing countries, and very few vaccinations occur there."

To stop the next pandemic, scientists are now researching how to create a universal influenza vaccine.

In October 2017, Vanderbilt University Medical Center in the U.S. announced the Universal Influenza Vaccine Initiative. The university said researchers are "leading an international effort to develop a universal influenza vaccine that would protect everyone against all strains of the flu anywhere in the world."

The university added that researchers will begin tests in early 2018. The Human Vaccines Project, a public-private partnership, is funding the project.

However, until a universal influenza vaccine is available, today's seasonal flu vaccine remains important. Experts say that they may prevent the spread of the flu virus and may lower the risk of a deadly pandemic like the one in 1918.

influenza – n. a common illness that is caused by a virus and that causes fever, weakness, severe aches and pains, and breathing problems

pandemic – adj. occurring over a wide geographic area and affecting an exceptionally high proportion of the population

archive – n. a place in which public records or historical materials (such as documents) are preserved

suffocate – v. to die because you are unable to breathe

immunity – n. medical : the power to keep yourself from being affected by a disease — usually + to (They have developed immunity to the virus.)

strain – n. a group of closely related plants or animals

circulate – v. to pass from person to person or place to place

efficacy – n. the power to produce a desired result or effect

prevalent – adj. accepted, done, or happening often or over a large area at a particular time : common or widespread