Update Required To play the media you will need to either update your browser to a recent version or update your Flash plugin.
By Anna Matteo
16 October, 2017

Each year nearly three out of four children around the world experience some kind of violence.

A new report confirms that finding and another troubling development: Childhood violence is linked with violence against women. Children who see their mother being abused are more likely to be abused as an adult or become abusers themselves.

The report is called "Ending Violence in Childhood: Global Report 2017."

The study was prepared for a children's rights group called Know Violence in Childhood. The organization was launched in India three years ago.

The study found that childhood violence happens nearly everywhere -- in rich and poor countries alike. It affects an estimated 1.7 billion children every year.

This violence includes fighting or bullying -- the mistreatment or abuse of someone by a stronger or more powerful individual. It can also include sexual abuse, sexual violence and physical punishment, both at home and in school. The researchers did not include violence from war and other events.

Ramya Subrahmanian is executive director of Know Violence in Childhood. She said that children experience emotional and physical punishment at young ages -- some from as early as two years of age.

She adds that violence is a learned behavior that comes from deep, long-held cultural values. For example, in some societies, beating is a form of discipline. 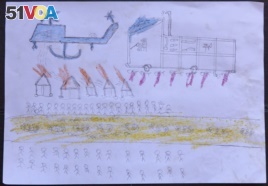 A drawing by a Rohingya boy, Abdullah, reveals the horrific experiences he endured while fleeing from Myanmar to Bangladesh, at a child-friendly space at the Balukhali makeshift refugee camp in Cox's Bazar district in Bangladesh, Oct. 2, 2017.

Know Violence in Childhood reports that up to 8% of the world's Gross Domestic Product (GDP) is spent on repairing the damage caused by childhood violence. GDP is usually defined as the total value of all goods and services. The report notes that even with such a high cost, governments fail to invest in policies that could stop the causes of childhood violence.

The group's website explores ways to end the violence.

It reports that experts say the first step is to speak out about violence against children. Keeping silent only increases the chance that violence will continue. The experts also say that it is important to educate caregivers and empower children to be strong and resilient.

The report says that anti-violence education needs to be included in school systems, community programs and in health services.

Carol Pearson wrote this story for VOANews. Anna Matteo adapted her story for Learning English. Her report includes information from the "Ending Violence in Childhood: Global Report 2017." George Grow was the editor.