Update Required To play the media you will need to either update your browser to a recent version or update your Flash plugin.
By Anna Matteo
17 July, 2017

A mind filled with fear and bad thoughts is an unquiet mind. When you are worried, it can be hard to direct your attention on even a minor problem.

For some people, this can interfere with work, sleep and other activities. In others, it could lead to a serious mental disorder. People who suffer from anxiety, a nervous disorder, have unreasonable thoughts and fears about the future. Often they are unable to control these thoughts. They are also less able to deal with stress.

What is mindful meditation?

Meditation is a simple, low-cost way to help calm an unquiet brain. We can define mindful meditation as thinking quietly about what is going on in the present. You don't think about the past or the future. You think only about your own breathing and what you sense around you.

Should you start thinking about a future task or a past mistake, you simply tell your mind to stop and return to the here and now. Another part of mindful meditation is to let yourself experience any thoughts and feelings without judgment.

Around the world, the number of people reporting stress and anxiety is increasing.

The World Health Organization says that between 1990 and 2013, the number of people suffering from depression and/or anxiety rose by nearly 50%. The WHO's website says this increased the number from 416 million to 615 million people.

This is not just a health issue, but also an economic one. WHO experts estimate that depression and anxiety disorders cost the world economy US$1 trillion each year. Stressed and anxious workers who can't stay focused are not productive.

The researchers found that meditating for 10 minutes a day may help keep people's minds from becoming unfocused. So, mindful meditation may help people stay on task.

Mengran Xu is a clinical psychologist at the University of Waterloo in Ontario. He and his colleagues studied with people who showed signs of anxiety.

In this study, 82 people suffering from anxiety were asked to perform a computer task that required high levels of focus. Then researchers interrupted them as they performed the work. The researchers studied their ability to stay focused.

Then the 82 individuals were divided into two groups. One group listened to an audio book. The other group did mindful meditation for about 10 minutes.

Finally, researchers asked all the subjects to go back to their computers.

Xu says that those who meditated performed much better on the task.

The researchers published their findings in the journal Consciousness and Cognition. 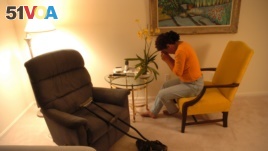 FILE - A patient recovering from hip replacement surgery holds a leaf from an orchid to her face as she practices meditation to deal with her pain.

The other study is from the Georgetown University Medical Center in Washington, DC.

For this study, researchers looked at 89 patients who have an anxiety disorder.

The researchers divided the patients into two groups. One group took a mindfulness meditation training program for eight weeks. The other group -- the control group – took a class on Stress Management Education for eight weeks.

People from both groups were asked to do something stressful. They had to give a short speech in front of a crowd -- not once but twice, both before and after their training.

During each speech, researchers measured levels of hormones and proteins that the body releases when a person is feeling stressed.

The control group, researchers said, showed small increases in stress on the second speech compared to the first. This suggests their stress and anxiety levels increased when they had to give the speech again.

However, when making the second speech, those who used mindful meditation produced fewer stress hormones and proteins. This suggests that meditation worked to reduce stress.

Elizabeth A. Hoge is a doctor and works in the medical center's Department of Psychiatry. She says people who used mindfulness meditation had "sharply reduced stress-hormone" levels and other biological responses to a stressful situation. And those who took the stress management training had poor responses.

Hoge and her colleagues reported their findings in the journal Psychiatry Research.

focus – n. a subject that is being discussed or studied : the subject on which people's attention is focused

on task – adj. concentrating or focusing on what is to be done

tend – v. to exhibit an inclination

wander – v. to go away from a path, course, etc. often used figuratively

interrupt – v. to stop or hinder by breaking in

consciousness – n. the condition of being conscious : the normal state of being awake and able to understand what is happening around you : a person's mind and thoughts

management – n. the act or process of controlling and dealing with something