More Americans Died From Drugs Than Ever Before

Update Required To play the media you will need to either update your browser to a recent version or update your Flash plugin.
By VOA
28 August, 2017


From VOA Learning English, this is the Health & Lifestyle Report.

In 2016, more than 60,000 people died in the United States because of drugs. That is the highest number of drug deaths and the fastest yearly increase in recorded history. Early data suggests that deaths from opioids and other drugs will continue to rise in 2017.

Drug overdose is now the leading cause of death for Americans under the age of 50. U.S. Deputy Attorney General Rod Rosenstein made this statement in June 2017 at a news conference with Drug Enforcement Agency (DEA) officials. 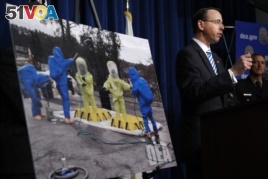 Rosenstein called it a "horrifying surge in drug overdoses." He added that drug abuse is wrecking families and communities throughout the U.S.

More than two million Americans have some sort of physical dependence on opioids. Opioids are a type of painkiller that are legally prescribed to many people. Opioids are addictive if people take too much of them or take them for a long period of time.

However, there is a new and even more dangerous part of the opioid crisis and it is happening much more often. This is the making and selling of extremely strong, illegal types of drugs that copy ones that already exist. One such drug is fentanyl.

Fentanyl is so strong that even the smallest amounts — as little as two or three grains — can kill. Police officers and other first responders who try to help drug overdose victims are often affected by the drug themselves.

DEA does not yet have data on this part the problem. However, officials say there is a clear increase in cases where first responders have become ill while handling evidence or helping overdose drug victims.

Chuck Rosenberg is a high-level official at the DEA. He has warned emergency responders to take great care in drug-overdose cases. He advises them to wear protective gear such as masks and gloves.

Even dogs trained to find illegal drugs are at risk. Their handlers have begun carrying antidotes for both the animals and themselves. However, these new synthetic drugs are so powerful that many doses of antidotes are sometimes needed to save the rescuers.

Rosenberg summed up DEA advice to emergency teams at an overdose scene: "If you don't know what it is, assume there's something in it that will kill you.''

The extremely fast rise in opioid problems is also happening in Europe. The European Monitoring Center for Drugs and Drug Addiction reported in June 2017 that dangerous synthetic drugs similar to heroin and morphine are a growing health threat in the European Union.

Experts at the center say on its website that more than 8,000 people died from overdose in the EU in 2015. This is the third year in a row that the number of overdoses has increased in the EU. And the center warns that drug-related deaths in Europe could be much higher. For this, it blames delayed reporting and "under-reporting in some countries."

data – n. acts or information used usually to calculate, analyze, or plan something

opioid – medical n. possessing some properties characteristic of opiate narcotics but not derived from opium

horrifying – adj. something that causes someone to feel horror

antidote – n. a remedy to counteract the effects of poison

sum up – phrasal verb to present a summary : to assess and then describe briefly

synthetic – adj. made by combining different substances : not natural