Update Required To play the media you will need to either update your browser to a recent version or update your Flash plugin.
By Anna Matteo
26 June, 2017

We humans spend about one-third of their lives asleep. This may sound like a lot of time, but it is not wasted.

Sleep helps us stay healthy, but it also helps our brains remember. Our brains need good sleep to remember what we do and learn during the other two thirds of our lives when we are awake.

Besides keeping us healthy, some new research shows that a good night's sleep helps make us more intelligent.

Researchers at the University of Wisconsin - Madison have found that sleep helps improve brain performance by shrinking synapses in the brain. A synapse is the area where cells pass messages to other cells. 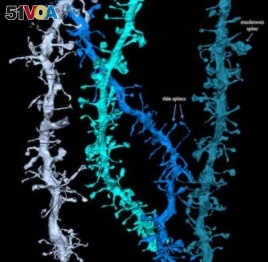 3D images of synapses that shrink during sleep. Credit: Wisconsin Center for Sleep and Consciousness

Scientist Chiara Cirelli is a lead investigator at the school's Center for Sleep and Consciousness. She told VOA that sleep is when the human brain mixes information it has learned while awake into its general collection of knowledge.

However, the brain forgets unimportant details. This forgetting is important. It makes space for new learning and new memories.

Cirelli said that the Center's research began with this hypothesis: We sleep so that our brain can repair and refresh itself. She said the idea seems simple and reasonable. However, testing and discovering how it works has been extremely difficult.

Cirelli and Center director Giulio Tononi have been trying to prove the connection between sleep and the brain's synapses since 2003. Cirelli said the researchers knew "that stronger synapses are also bigger." So, they began their study by "measuring the size of the synapses" in the brain.

They also knew that during sleep, the brain checks on all its synapses and resets itself for the next day. The team wanted to see if the synapses of the brain are bigger after being awake all day and smaller after a good night's sleep.

How do you measure a synapse?

Synapses are only about 20-40 nanometers wide. So, the team looked for changes in these already tiny spaces between nerve cells. Cirelli says the process is difficult because "all the actual measurements of the synapses have to be done manually."

The team had to wait until improvements in laboratory technology made it possible to see these tiny changes.

A University of Wisconsin press release called the research a "huge job." Many research specialists worked for four years to photograph, rebuild and study certain areas of a mouse brain. The report also said the scientists measured 6,920 synapses.

Cirelli says they found that synapse size and strength are upset by being awake and restored by sleeping.

The study found that sleep keeps our brains malleable and able to keep learning new things.
She says our synapses shrink as our brains clean themselves during sleep. We wake up refreshed and ready to fill those synapses with new information.

Earlier findings suggest that without sleep our synapses never shrink. The researchers say the concern is that "if synapses continue to strengthen," neurons -- which use synapses to communicate -- "will start responding too often and too much."

This may result in too much noise in the brain. The real and important signals might get lost.

The research findings are the result of more than ten years of work at the University of Wisconsin – Madison. The researchers published their findings in the journal Science.

The Mayo Clinic is a respected research hospital in Rochester, Minnesota. It gives these six suggestions for getting a good night's sleep.

VOA's Kevin Enochs reported on the research at University of Wisconsin - Madison. Anna Matteo adapted his report and added additional information for Learning English. Caty Weaver was the editor.

synapse – n. the point at which a nervous impulse passes from one neuron to another

refresh – v. to restore or maintain by renewing supply

manually – adv. of or relating to using the hands

upset – v. to disturb or overturn a natural or stable order

respond – v. to have a particular reaction to something

stuffed – adj. informal describes a feeling that you have eaten too much : v. to fill (something) so that there is no room for anything else