Health Officials in Uganda Watching for New Cases of Ebola

Update Required To play the media you will need to either update your browser to a recent version or update your Flash plugin.
By VOA
10 December, 2012

From VOA Learning English, this is SCIENCE IN THE NEWS, in Special English. I'm Christopher Cruise.

And I'm Faith Lapidus. Today, we tell about renewed concerns in central Africa about a deadly disease. We tell about efforts to restore an ancient city along the border between Syria and Turkey. And we tell how the simple act of babysitting may have had a major effect on human development.

Ugandan health officials are watching for more cases of Ebola after three people recently died from the disease. The World Health Organization had reported a few weeks earlier that Ebola was no longer a threat in the country. 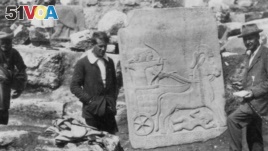 Turkey Ancient City
Ugandan Health Minister Christine Ondoa reported last month that two of the victims belonged to the same family. She said they died from the Sudan strain of the virus in an area about 50 kilometers from Kampala. But she noted studies in nearby Entebbe confirmed that the disease has struck again.

"Another viral hemorrhagic fever, Ebola, has broken out in the country. This follows confirmation from the laboratory investigations done at the Uganda Virus Research Institute."

The health minister said people who had come into contact with the disease were being closely watched.

The World Health Organization recently declared an end to the health threat from Ebola in Uganda. At the time, 17 people had died of the disease. WHO officials also said that Ebola had been stopped in the Democratic Republic of Congo. At least 25 people in that country died of Ebola.

There is no known cure for the disease. Dr. David Heymann formerly worked for the WHO. He describes the first symptoms of the disease as similar to those of other tropical African sicknesses. The signs include a sore throat, high body temperature, muscle and joint pain. Patients often report having a headache and feeling extremely tired. Dr. Heymann said that during the seventh and eighth day of Ebola, people feel better. About 30 percent go on to survive. The others develop bleeding from openings in the body.

The WHO says Ebola first appeared in 1976 at the same time in Sudan and in the DRC, which was formerly called Zaire. The Congo cases took place in a village near the Ebola River, which gave the virus its name.

Thousands of years ago, a battle was fought at a city called Karkemish. Babylon and other early states clashed for control of what is now in a neutral border area between Turkey and Syria. Not far away, a modern-day civil war is taking place. Syrian rebels are fighting military forces loyal to Syrian President Bashar al-Assad.

The historic battle of Karkemish was important enough to appear in the ancient religious writings of Jews and Christians. Nebuchadnezzar the Second led the Babylonian army to defeat the forces of Egypt and Assyria.

Researchers hope to open the battle site area to visitors in about two years. Turkish military forces are guarding the area, which is now closed to the public. But in October of 2011, the Turkish military let archeologists begin work there.

Almost a century had passed since extensive excavations were done at Karkemish. Removal of landmines placed on the site during recent conflicts helped make the latest work possible.

Nicolo' Marchetti of the University of Bologna directs the current project. His Italian and Turkish team finished a 10-week dig on the Turkish side of Karkemish in late October. They started work in August, not long after violence on the Syrian side of the border.

Professor Marchetti's team follows in the footsteps of other archeologists. Experts from the British Museum excavated at Karkemish. The work began in 1878 under Patrick Henderson, the British consul in the city of Aleppo.

The area had been identified earlier by George Smith, also from the British Museum. He is remembered for discovering a stone tablet that tells the story of a great flood. The flood story appears in Jewish, Christian and Islamic writings. Smith fell victim to disease and died in Aleppo at age 36.

T.E. Lawrence is probably the best known of the Karkemish investigators. Lawrence was a British writer who became famous as the adventurer, Lawrence of Arabia. He began work at Karkemish as assistant to archeologist Leonard Woolley in 1911. The Ottoman Empire controlled the site at that time.

Lawrence wrote about the information written on stone tablets. He told of helping to settle fights among the workers on a dig and of repairing ancient pottery. His colorful descriptions of Aleppo seem especially affecting today, when the Syrian city is a place of continual battle.

Archeologists left Karkemish after the start of World War One in 1914. Work started again after the war. But later came conflict between Turkish nationalists and French colonizers. Machine gun nests were built on the site. The landmines were buried there in the 1950s and later.

Over the years, statues, temples and other artifacts have been discovered and removed. Some of these objects are now in the Anatolian Museum of Civilizations in Ankara.

Today, Nicolo' Marchetti says only five percent of the site has been investigated. That raises the possibility that many more artifacts may be found there. The professor looks forward to a newly developed Karkemish in the near future. He can imagine a beautiful park on the Euphrates River. He hopes it would attract many visitors, who will help poor local cities and villages.

In modern society, grandmothers are often asked to watch children. But a few million years ago, when primate grandmothers started doing that, they may have had a major effect on how human beings developed. Scientists believe it is a big reason why humans live much longer than other primates. They call it the "grandmother hypothesis."

Kristen Hawkes is with the University of Utah.

"One of the things that's really different about us humans, compared to our closest living relatives, the other great apes, is that we have these really long lifespans. We reach adulthood later and then we have much longer adult lives. And an especially important thing about that is that women usually live through the childbearing years and are healthy and productive well beyond."

Yet other primates are not as lucky.

"In other great apes, females, if they make it to adulthood - they usually die in their childbearing years - and they get to be old, frail and gray and less able to do all the things that we associate with, you know, getting old. Well, of course, it happens to all of us, but it happens slower and later to us compared to the other great apes."

"One of the things it did was restrict the availability of the kinds of things that little kids, little apes, can feed themselves on. So that meant that ancestral moms had two choices -- they could either follow the retreating forests, or if they stayed in those environments, then they just would have to feed their kids themselves. You know, the kids couldn't do it."

So, if mothers decided to feed their children themselves, they would not be able to give birth as often. They would just be too busy finding food. That is where the grandmother can help.

"It would also mean that older females, whose fertility was coming to an end, could now make a big difference in their fitness by helping their daughters feed those grandchildren. And that would mean then that moms could wean earlier."

"That whole array of changes could account for why we have longer adult lifespans. We age more slowly. We mature later. Our kids are actually dependent longer, but we wean them earlier than the other apes do. And that hypothesis has been on the table for a while."

Caring for their daughters' children may have caused genetic changes that, in turn, caused older females to live longer. Those changes were eventually passed down from one generation to the next.

Computer models show that chimpanzees who reached adulthood at age 13 lived another 15 or 16 years. But humans in developed countries generally lived another 60 years or more.

Professor Hawkes believes the lengthening of lifespan happened quickly in scientific terms -- between 24,000 and 60,000 years.

"This combination of grandmothering and increased longevity go together. When there's grandmothering, that makes more grandmothers. And it makes longevity increase from an apelike range into a humanlike range."The "grandmother hypothesis" comes from research done in the 1980s. Professor Hawkes and anthropologist James O'Connell lived among the hunter-gatherer Hadza people in Tanzania. Older women in that community spent their day gathering food for their grandchildren.

Professor Hawkes says grandmothering made humans more socially dependent on each other and, in her words, "prone to engage each other's attention."
Related Articles
go top