Heat May Be Nature’s Deadliest Killer

Update Required To play the media you will need to either update your browser to a recent version or update your Flash plugin.
By Jerilyn Watson
11 June, 2012

BOB DOUGHTY: And I'm Bob Doughty. This week, we tell about health problems linked to extreme heat. We tell what experts suggest to prevent and treat these problems.

FAITH LAPIDUS: Extremely hot weather is common in many parts of the world. Although hot weather just makes most people feel hot, it can cause serious medical problems -- even death. 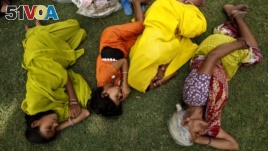 Indian villagers sleep in the shade of a tree on a hot summer day in Allahabad, India
Floods, storms and other natural events kill thousands of people every year. So does extreme heat. Experts say heat may be nature's deadliest killer.

Last month, for example, intense heat was blamed for about eighty deaths in India. About one-fourth of those deaths were said to be in the eastern state of Odisha. One day, temperatures in the Odisha town of Titlagarh reached forty-five degrees Celsius.

BOB DOUGHTY: Several hot days that follow each other are considered a heat wave. Experts say heat waves often become dangerous when the nighttime temperature does not drop much from the highest daytime temperature. This causes great stress on the human body.

Doctors say people can do many things to protect themselves from the dangers of extreme heat. Stay out of the sun, if possible. Drink lots of cool water. Wear light colored clothing made of natural materials. Make sure the clothing is loose, permitting freedom of movement. Also, learn the danger signs of the medical problems linked to heat.

FAITH LAPIDUS: The most common health problem linked to hot weather is heat stress. Usually, it is also the least severe. The causes of heat stress include wearing heavy clothing, physical work or exercise, hot weather and high humidity. Humidity is the amount of water in the air.

If several of these conditions are present at the same time, a person's body temperature may rise above safe levels. The person loses large amounts of body water and salt in perspiration. Perspiration is one of the body's defenses against heat. It is how the body releases water to cool the skin.

Most people suffer only muscle pain because of heat stress. The pain is a warning that the body is becoming too hot. Doctors say those suffering muscle pain should stop all activity and rest in a cool place. They should also drink cool liquids. Doctors say not to return to physical activity for a few hours because serious conditions could develop.

BOB DOUGHTY: Some people face an increased danger from heat stress. They may have a weak or damaged heart, high blood pressure or other problems of the blood system. Severe heat increases problems for small children, older adults and those who have the disease diabetes.

A person suffering heat exhaustion feels weak and extremely tired. He or she may have trouble walking normally. Heat exhaustion may also produce a feeling of sickness, a fast heartbeat, breathing problems and pain in the head, chest or stomach. Doctors say people with such problems should rest quietly in a cool place and drink plenty of water. They also say it may help to wash with cool water.

BOB DOUGHTY: Heat exhaustion can develop quickly. It also can develop slowly, over a period of days. Doctors call this dehydration exhaustion. Each day, the body loses only a little more water than is taken in. The person may not even know this problem is developing. If the problem continues for several days, the effects will be the same as the usual kind of heat exhaustion.

Experts say even a two percent drop in the body's water supply can cause signs of dehydration. These signs include problems with memory and even simple mathematics.

FAITH LAPIDUS: Dehydration limits a person's ability to work and think. Experts say a reduction of only four or five percent in body water leads to a drop of twenty to thirty percent in work ability. The loss of salt through perspiration also reduces the amount of work that muscles can do.

The treatment for dehydration exhaustion is the same as for heat exhaustion. Drink plenty of water and rest in a cool place. Even better, doctors say, drink about two liters of water a day so problems with dehydration will not have a chance to develop.

BOB DOUGHTY: Heat exhaustion can lead to heat stroke if it is not treated. Heat stroke is the most serious disorder linked to hot weather. It results when the body is not able to control its temperature. The body's temperature increases and perspiration fails.

Generally, the body temperature rises to more than forty degrees Celsius. The body stops perspiring. The skin becomes dry and very hot. A person may become unconscious, not knowing what is happening.

Doctors say tissues and organs begin to cook when the body's temperature is higher than forty-two degrees Celsius. Permanent brain damage and death may result. Someone suffering heat stroke requires immediate medical attention. Doctors say such treatment is necessary or the person could die before help arrives.

FAITH LAPIDUS: The purpose of immediate treatment is to cool the victim as quickly as possible to stop the body temperature from increasing. Begin by moving the victim out of the sun. Raise the person's feet up about thirty centimeters. Take off the victim's clothing. Put cool water on the body. Place pieces of ice in areas where blood passageways are close to the skin. These include the back of the neck and under the arms.

BOB DOUGHTY: Experts say water is important for many reasons. Between fifty-five and seventy-five percent of the body is water. Water in blood carries hormones and antibodies through the body. Water in urine carries away waste materials. Water is needed for cooling the body on hot days, and when we are working or exercising. Water carries body heat to the surface of the skin. There, the heat is lost through perspiration.

Health experts say adults should drink about two liters of water a day to replace all the water lost in liquid wastes and perspiration. They say people should drink more than that in hot weather.

Experts say it is important to drink before, during and after exercise. They say we should drink water even before we start to feel like we need something to drink. During hot weather, cool liquids are best. Also, avoid sweet drinks and alcohol.

FAITH LAPIDUS: We need to add that doctors also say it is possible to drink too much water. Some people, for example, do this if they exercise hard during a heat wave. Experts with the Mayo Clinic say drinking too much water can cause hyponatremia. In this condition, the level of sodium in the blood falls too low.

The result is that the amount of water in the body increases. This causes cells to become larger. Mayo Clinic experts say the enlarged cells can cause a person to become sick or restless. They also can interfere with mental ability, make muscles weak and cause pain in the head. In a mild case, simply reducing fluids may be all that the person needs. But medical help is necessary if the condition is more severe.

Experts have suggestions for runners and others exercising or working hard in hot weather. They say drinking a sports drink with sodium in it can help prevent the condition.

BOB DOUGHTY: Doctors say actions other than drinking water can protect against the health dangers of heat. Stay out of the sun, if possible. Wear loose, lightweight and light colored clothes. Wear a hat or other head covering when in the sun. Eat fewer hot and heavy foods. If possible, cook foods during cooler times of the day. Also, rest more often. Physical activity produces body heat.

Experts say these simple steps can prevent the health problems linked to heat. They will prevent sickness, help you feel better and may even save your life.

FAITH LAPIDUS: This SCIENCE IN THE NEWS was written by Jerilyn Watson. Our producer was June Simms. I'm Faith Lapidus.