Update Required To play the media you will need to either update your browser to a recent version or update your Flash plugin.
By VOA
25 September, 2015


Grasslands cover one third of the Earth's surface. Grasslands are known by many names, such as savannah, prairie, steppes or the plains.

The health of grasslands depends on how much animals graze on the native plants. If too many animals feed on the plants, the area could become a desert. But too little grazing can also be bad for grasslands.

The Great Plains covers a large area in the middle of the United States. A lot of it is grasslands. The Great Plains are west of the Mississippi River and east of the Rocky Mountains. The area includes parts of 10 states. 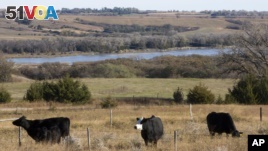 Grasslands in the Niobrara Valley, Nebraska, are rotated to let them heal from grazing animals. (AP)

The Great Plains are known for supporting large cattle ranches. A growing number of environmental groups are joining with local ranchers to improve the health of grasslands and make their businesses more profitable.

That is the sound of the wind blowing native grasses in Niobrara Valley of Nebraska.

Steve Hicks directs the Niobrara Wildlife Refuge for the U.S. Fish and Wildlife Service. One of its goals is to protect native plants and animals.

"The bison are part of our purpose here at Fort Niobrara Refuge, and we're supposed to provide a good habitat for them."

Three hundred years ago, 20-million bison lived on prairies that covered most of what is now the American Midwest. The bison traveled thousands of kilometers each year, seeking food and fleeing other animals that hunted them. Their grazing helped the grasslands stay healthy. Their waste also helped the plants grow. And because the bison did not stay in one area for very long, grasslands had time to recover.

Today, the country has only about 30,000 wild bison. They mostly live in fenced-in areas on public land.

Fort Niobrara raises 350 bison on 9,000 hectares. Steve Hicks says it is not easy to control the large animals.

"And bison are manageable, but it's a lot bigger job to keep bison contained than it is cattle. They'll go just about where they want, if they really want to."

The Fish and Wildlife Service also lets cattle ranchers use about 25,000 hectares of the government's land.

One recent day, rancher Bob Grabher and a few other men were moving about 500 cows and their calves.

The men were riding on small vehicles near the bison. They used a combination of methods to get the animals out of a 200-hectare fenced pasture where they have been grazing for a few days.

"The refuge sets it up and gives you what pastures you will be in and how many days here in each pasture."

The Niobrara Wildlife Refuge asks ranchers to graze their animals on the grasslands as the wild bison did hundreds of years ago. So Bob Grabher's team moved the cattle to another fenced area that hasn't been touched for three years.

Dean Churchill is Mr. Grabher's son. He said that the ranchers can raise more cattle because they are able to lease land from the government. The animals never graze a pasture continuously. But the ranchers often let them stay in one area for two weeks. And instead of letting a pasture rest for years, they often bring cattle back within a few months. Mr. Churchill said this can help improve the grass.

"It adds compaction to the soil; the hoof prints within the soil allows the moisture to penetrate the soil better."

Mr. Churchill says he learned these "planned grazing" techniques 20 years ago from Allan Savory. Today, the Savory Institute trains ranchers around the world to use planned grazing. The institute's Byron Shelton says it is important for ranchers to know when to move their cattle.

"Once it's bitten, no matter how far down its eaten, if it starts to re-grow, we move the animals away until it has re-grown. And that way we have the roots being the strongest they can to hold soil, hold water, make the ecosystem function."

"And at the same time we've improved the financial outcomes for ourselves and for our lessee at the ranch, and his quality of life I think has credibly improved."

diversity – n. the quality or state of having many different forms, types or ideas

pretty – adv. very; to a great degree or extent

manageable – adj. easy to control or deal with

sets it up – expression to schedule; arrange

compact – v. to press (something) so that it is harder and fills less space

hoof prints – n. marks made in the ground by the hooves of animals

penetrate – v. to go through or into something

outcome – n. something that happens as a result of an activity or process

lessee – n. a person who has an agreement that allows for the use of a car, house or land for a period of time in exchange for a payment

We want to know your thoughts on this story. Write to us in the comments section.