Update Required To play the media you will need to either update your browser to a recent version or update your Flash plugin.
By Dan Friedell
28 May 2021

Stunt performers often take the place of famous male and female actors in these action films so the big stars do not get hurt. At one point, movie producers would commonly use stuntmen wearing hairpieces, or wigs, to perform these actions for female actors.

The practice began to change in 2017 when an American stuntwoman, Deven MacNair, started a discrimination complaint. She said a producer had used a stuntman to perform a stunt for a female actor on a set she was working on.

Lucas Dollfus is the director of Campus Univers Cascade, or CUC, in northeastern France. He told the Reuters news agency, "We don't need wigs anymore. The women are badass in any case." 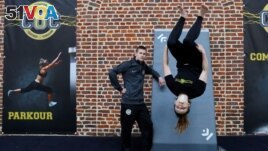 CUC calls itself the world's biggest stunt school. About a third of the students at the school are women like Valeriane Michelini. Once trained as a dancer, Michelini is now training to fight, crash through glass windows and jump out of helicopters at CUC. She said fighting has a different kind of movement than dancing.

"I'm used to thriving in a graceful and feminine world," the 29-year-old said. "And now, I'm in quite the opposite."

She spent many hours talking with women who do stunts in Hollywood, including those who started in the 1960s and 1970s. "Generally, women are holding their own, and getting most of these opportunities," Wright said.

Wright said stuntwomen do not usually go to a stunt school. They often find work by learning from or meeting people in the industry. Some make videos on YouTube or TikTok to show their skills.

"Sometimes stunts run in families," Wright said. "Not every stunt woman had that, but a lot of them had fathers that helped them develop the skills."

Malik Diouf is a trainer at the CUC stunt school in France. He said CUC cannot keep the students in school, as more women are needed for stunts with the growth of streaming services like Netflix and Amazon Prime.

"As soon as they have the slightest skills, they leave directly to work with the Americans, the English or the rest of the world," he said.

Wright agrees that this is a good time for women to get jobs as stuntwomen.

"There is a lot more television and movies being made right now that have women doing action, and so there's a lot more opportunity now for women to get into this profession."

There is also more work for stuntwomen because the actors in movies and television are more diverse. That means there are more opportunities for women from different racial backgrounds. Once they get started, Wright said it is a good idea for stuntwomen to keep learning new skills. Perhaps they might go to a driving school to learn how to control a car in a chase or a race.

"Stunt people have to keep their skills up to par," Wright said.

While the opportunities may be growing, it is still not an easy business. Stunt people may know how to fight or fall out of cars, but they still get hurt.

Wright said stunt people are very careful in the way they prepare for their work because they know it is dangerous. Sometimes it may be just a broken bone. But in 2017, stuntwoman Joi Harris, who had been a professional motorcycle racer, died in a chase during the filming of Deadpool 2.

"I knew some stunt women, but I did not know this much about it before I started the film. And it was really exciting to meet them, you know, because they're very inspiring people."

Dan Friedell wrote this story for Learning English with additional reporting from Reuters. Hai Do was the editor.

Now that you have learn a little bit more about stunt women, what do you think about their work? Tell us in the Comments Section and visit 51VOA.COM.

complaint- n. in the legal world - a formal charge saying that someone has done something wrong

thrive –v. to flourish or succeed

graceful –adj. moving in a smooth and attractive way

hold their own – idiom, to stay in a good position or keep a job

up to par – idiom, meeting requirements or expectations

inspire –v. to cause someone to appreciate someone else