Update Required To play the media you will need to either update your browser to a recent version or update your Flash plugin.
By VOA
25 November, 2015


Three times a week, a group of smallholder farmers work together in a community field in Kirolirwe, a village in North Kivu province in the Democratic Republic of the Congo.

Recently, the group prepared the soil before planting potatoes.

"Let's go!" shouted the team leader. They encouraged each another to work harder. 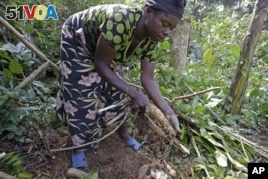 A woman tends casava in the Congo. Small farmers are having a difficult time getting access to land in the Democratic Republic of the Congo.

Nearly 200,000 displaced persons fled to camps in the Democratic Republic of the Congo because of violence in the east. Most people there say land disputes are one of the root causes of the area's conflicts.

So recently, large landowners have been asked to free up more of their land to individual farmers interested in cultivating crops.

Is this a solution to the land problem?

An organization called FOPAC is teaching this group better farming methods like sowing improved seeds in straight line furrows. It is also showing the farmers how to remove grass instead of burying it, and to use animal waste as fertilizer.

He says the surrounding hills are owned by Olive Lembe, the wife of Joseph Kabila. Kabila is the president of the Democratic Republic of the Congo.

Much of the land once was cultivated. Mumbere Makuke says, the person Olive Lembe bought the property from last year stopped planting crops. Now, the land is mainly grassland.

Lembe is now urging smallholders to grow crops on some of her land, which she has renamed Hope Farm. Many local people have trouble gaining use of the land. Ranchers bought much land in the area, often on dubious terms.

Hope Farm requires farmers to make payments for use of the land, and payments have risen sharply in recent years.

Mumbere Makuke says the usual rental payment in this area for one hectare is $200 for a season of four months. Many people rent smaller fields of about 400 square meters for $10 a season.

He says "We decided to dig ditches around the fields to stop cattle from getting across."

Reporter Nick Long says the farmers he spoke with seemed happy with the new farming techniques. But there is little manure available for their own fields. Also, improved potato seeds cost $1,600 for the two tons needed to plant one hectare.

That is a lot of money for many farmers. Josaphat Musansa is an agricultural researcher. He says many farmers are not wealthy enough to pay rent, let alone buy tons of improved seeds.

He says those farmers can use land if they give a share of their harvest, often 20 percent, to the landowner or manager. But as improved techniques take hold, some landowners may not be satisfied with a 20 percent share of what is likely to be a poor harvest.

Unless the government introduces policies to help smallholder farmers, they will have less and less land to use in this area. Smallholders risk becoming landless laborers as people with more money outbid them for access to land.

Nick Long reported this story from Goma in the DRC. Mario Ritter adapted it for VOA Learning English. George Grow was the editor.

trend – n. a direction of change; something that is popular

concessions – n. rights to do business on property that belongs to the government or another company or person

cultivate – v. to prepare and use for growing plants

rental – adj. of or relating to rent, payments given in exchange for being able to use something

outbid –v. to offer to pay a higher price than another person for an object at an auction