Update Required To play the media you will need to either update your browser to a recent version or update your Flash plugin.
By Bruce Alpert
25 October, 2017


Tom Costello Jr. was once afraid of homeless Americans.

"I was so afraid that if I saw a homeless person walking down the street, I'd cross the street," he said.

That changed seven years ago after his wife, a volunteer at a homeless shelter, persuaded him to help with a holiday dinner for shelter residents. 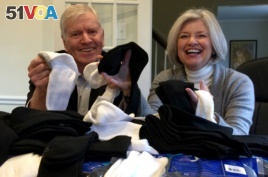 Tom Costello remembers going a store and buying socks for the residents. He knew many of them were in need of clothing.

At the shelter, Costello said, he dropped a pair of socks into a bag for a woman. She asked him if she could have socks for a friend who wasn't with her that day. He gave her another pair.

"She started to cry and told me that nobody had ever given me socks before," Costello said. "Then she reached out and gave me a hug."

That experience at the shelter helped Costello end his fear of the homeless. It also led him to set up a group called "The Joy of Sox." It borrows from "The Joy of Sex," the name of a popular book in the 1970s.

The Joy of Sox collects socks from donors and gives them mostly to shelters in the Philadelphia, Pennsylvania area, where Costello and his wife Nancy live.

But the group has been expanding its reach.

It now provides socks to homeless shelters in 21 states and three countries: Mexico, Afghanistan and Uganda. 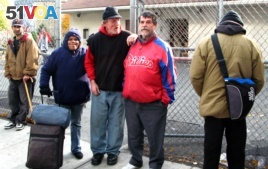 Homeless people outside St. Francis Inn, in the Kensington section of Philadlephia.

Costello explains that some Americans give food, coats and other clothing to shelters. But donating socks was not something most people thought about. And, he said, socks are very helpful at keeping people warm, in cold weather.

A man named Kiwi, who has lived in homeless shelters, explained that socks are important to people who spend a lot of time outdoors.

Kiwi said most of the time he can find enough food through shelters and soup kitchens. But socks are much more difficult to get, he noted.

Being without socks leads to "sores on your knees, between your toes and on your ankles," he said on the Joy of Sox website.

Costello said he expects as many as 250,000 pairs of socks to be donated by the end of the year. Many come from sock-giving programs set up by schools.

The Guinness Book of World Records keeps records for just about anything. Its list of records includes the most sock donations in eight hours. Temple University students broke that record by donating 2,798 pairs on October 9, 2017.

She said, "We're starting a new tradition to break a new record every year. But it really isn't about us. It's about who we are helping."

Costello said his hope for "The Joy of Sox" is for it to be the best sock charity in the world. He also wants the group to give six pairs of socks to every homeless person in the United States each year.

Other U.S. groups that give out socks to poor people are Bombas and Hannah's Socks.

We want to hear from you. Write to us in the Comments Section and share your views on 51VOA.COM. What ideas do you have for donations to the homeless to make their lives better?

soup kitchen - n. a place that serves food to the poor

homecoming - n. an event at many colleges and high schools when past students return for a weekend that often includes a football game

charity – n. an organization for helping the needy

ankle – n. the joint between the foot and leg

bag – n. a container; something used to carry personal things

resident – n. someone who lives in a place for some length of time