Fans of the "Harry Potter" books and movies got to know actor Emma Watson, who played the character Hermione. 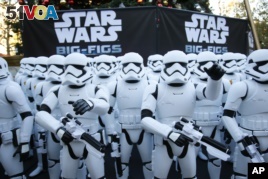 Stormtrooper action figures are seen as a part of an installation at The Americana at Brand for the opening of Star Wars: The Force Awakens, in Glendale, Calif., Dec. 17. (Photo by Danny Moloshok/Invision for JAKKS/AP Images)

Dumezweni is black, and her family is from Swaziland in Africa.

Dumezweni has an impressive list of credits in theater, film and television.

She won a major award for a role in "A Raisin in the Sun" and performed in a number of Shakespearean roles.

You can see her work in these videos, where she reads sonnets, or poems, by Shakespeare.

Dumezweni will appear in a London play called "Harry Potter and the Cursed Child" that follows the famous characters 19 years after the books ended. All the actors playing Harry, Ron Weasley and Hermione are adults.

It is scheduled to open next July.

The name Hermione appeared over 225,000 times on Twitter on Monday. Dumezweni was endorsed by J.K. Rowling, the creator of the series.

"White skin was never specified," Rowling replied to a tweet on Twitter. That reply was re-tweeted over 50,000 times.

People lined up all week just to see, "Star Wars: The Force Awakens." The film set a box-office record for a new movie over the weekend.

Star Wars sold almost $250-million in tickets since it opened Thursday night, beating the record set over the summer by "Jurassic World."

Around the world, the movie set a record with $529 million in ticket sales. It is an impressive number, considering the film does not open in China until January.

The Chinese market added $90 million to "Jurassic World's" sales, and "Star Wars" should reach at least that number.

One media analyst called the opening "the Super Bowl, the World Series and the Kentucky Derby all rolled into one perfectly realized movie event."

Most fans and reviewers were happy with the film, giving it a 94 percent "fresh" score on the website RottenTomatoes.com.

Even Hillary Clinton got in on the Star Wars frenzy. At the debate among Democratic presidential candidates Saturday, she ended with "may the force be with you." That is possibly the most famous line from all the Star Wars movies.

What do you think of the a black actress being cast as Hermione? We want to hear from you. Write to us in the Comments Section or on 51VOA.COM.

endorse – v. to publicly or officially say that you support or approve of (someone or something)

sonnet – n. a poem made up of 14 lines that rhyme in a fixed pattern

anticipation – n. a feeling of excitement about something that is going to happen