Update Required To play the media you will need to either update your browser to a recent version or update your Flash plugin.
By Ashley Thompson
15 May, 2018

A Chinese airplane made an emergency landing Monday after its front window broke and one of its pilots was partly pulled out of the plane.

The Sichuan Airlines passenger flight took off from Chongqing, in southwest China. It was traveling to the Tibetan capital of Lhasa. 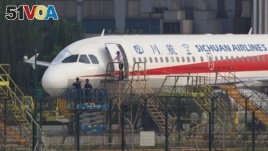 Workers inspect a Sichuan Airlines aircraft that made an emergency landing after a windshield on the cockpit broke off, at an airport in Chengdu, Sichuan province, China May 14, 2018. Picture taken May 14, 2018. REUTERS/Stringer

The airplane's other pilot, Liu Chuanjian, safely landed the plane in the city of Chengdu.

Now, Liu is being called a hero in China.

The plane was flying at a height of about 9,700 meters when an extremely loud sound was heard in the cockpit, Liu said. The cockpit experienced a sudden loss of air pressure and drop in temperature. When he looked over, Liu saw the cockpit's right window was gone.

Liu was reported as saying, "The next thing I know, my co-pilot had been sucked halfway out of the window."

The co-pilot was wearing his seatbelt. He was able to be pulled back inside the plane. He suffered minor injuries. One other employee was injured in the incident.

Liu took control. He had to land the plane manually because the automatic flight-control system stopped working. He safely landed the plane in Chengdu. None of the plane's 119 passengers were hurt, the Civil Aviation Administration of China (CAAC) said.

One unnamed passenger told the government-run China News Service that airline workers had been serving passengers food when the plane began to shake. Oxygen masks dropped. The plane dropped for a few seconds before it "stabilized again."

The passenger said, "I'm still nervous. I don't dare to take an airplane anymore. But I'm also happy I had a narrow escape."

The incident was a trending discussion Tuesday in China and around the world. Many are praising Liu for being able to land the plane. On the Chinese site Sina Weibo, users are writing messages with the hashtag #ChinaHeroPilot.

The Sichuan Airlines incident comes a month after an American passenger on a Southwest Airlines plane was partly sucked out after a window broke mid-flight. The passenger, Jennifer Riordan, later died.

Incidents involving partly broken windshields are somewhat common. They are usually caused by a bird or lightning striking the window. However, it is rare for an entire windshield to come off.

cockpit - n. the area in a boat, airplane, etc., where the pilot or driver sits

suck - v. to pull (something) with the force of moving water, air, etc.

manual - adj. operated or controlled with the hands or by a person

stabilize - v. to make (something) steady

nervous - adj. having or showing feelings of being worried and afraid about what might happen

windshield - n. the window at the front of a car, truck, etc., that protects the driver and passengers