Scientists May Have Found 'God Particle'

Update Required To play the media you will need to either update your browser to a recent version or update your Flash plugin.
By VOA
06 July, 2012

This week, scientists in Switzerland reported a big discovery about a very small particle. They think they have finally found a Higgs boson, or what some people call the "God particle." It could answer some basic questions about the universe and the creation of planets and life. Rolf Heuer is the director-general of CERN, the European Center for Nuclear Research, which reported the find.

ROLF HEUER: "I think we have a success today. We have a discovery. We have discovered a new particle, a boson -- most probably a Higgs boson, but we have to find out which kind of Higgs boson this is. Does it have the properties which we expect from the Standard Model? If not, what are its properties and where do they point to?"

In particle physics, the Standard Model is sometimes called "a theory of almost everything" that affects how subatomic particles interact and affect each other. Subatomic means smaller than an atom. 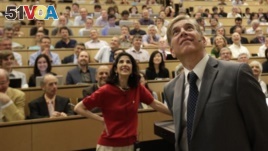 Fabiola Gianotti, Atlas team spokeswoman, and Joe Incandela, from the CMS team, look at a screen Wednesday during a scientific seminar to deliver the latest update in the search for the Higgs boson
Scientists believe the Higgs boson could explain how matter gets its mass. Mass is the amount of material in an object that gives it weight in the presence of gravity.

The subatomic particle that scientists have found fits the description of the Higgs boson predicted by physicist Peter Higgs. Scientists have been searching for it for forty-five years. Peter Higgs attended the event at CERN on Wednesday but did not want to say much about the findings.

PETER HIGGS: "I think it is not appropriate for me to answer any detailed questions at this stage. This is an occasion celebrating an experimental achievement, and I should congratulate the people involved."

Theorists believe the Higgs boson existed only during the first millionth of a millionth of a second after the Big Bang. That was the huge explosion when the universe was created more than thirteen billions years ago. Physicists at CERN are trying to recreate the high energies that existed at the time of the Big Bang.

CERN has the world's biggest atom-smasher, the Large Hadron Collider. This ten-billion-dollar collider produces high-energy crashes to investigate mysteries like dark matter and the creation of the universe. The results presented Wednesday are based on findings collected last year and this year from two experiments, called Atlas and CMS.

The scientists involved say more research must be done to be sure of their results. However, a spokesman for one of the experiment teams, Joe Incandela, says the boson is unlike any particle found so far.

JOE INCANDELA: "We are reaching into the fabric of the universe at a level we have never done before. This is telling us something. It is key to the structure of the universe. We are on the frontier now. We are at the edge of a new exploration and this could open up -- maybe we see nothing extraordinary, and we understand that maybe this is the only part of the story that is left. Or maybe we open up a whole new realm of discovery."

CERN had been planning to shut down its atom-smasher for two years for maintenance work. But because of these results, it will keep the Large Hadron Collider in service for another two to three months.

About two hundred people gathered at the Fermi National Accelerator Laboratory in the United States at two o'clock in the morning to watch the announcement from Geneva. Fermilab's Robert Roser points out the scientists at CERN were careful to say they found a "Higgs-like" object.

ROBERT ROSER: "It's a subtle difference and so what they will do over the course of the many years, they will start to investigate all of its properties to see if it acts, if it smells, tastes, and behaves the way they expect it to."