US Tech Industry Blamed for High Cost of Housing


Housing costs are rising in northern California because of a small supply of rental apartments and growing demand for them by technology workers.

A strong economy and the technology industry have been blamed for a housing crisis in the San Francisco Bay Area.

The industry pays high wages to many of its workers. Because the area is home to many high-tech companies, the workers are willing to pay more for housing. 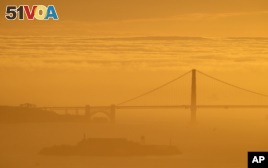 A blanket of fog is seen behind the Golden Gate Bridge and Alcatraz Island as the sun sets Sunday, Feb. 28, 2016, in Berkely, Calif. The San Francisco Bay area is one of the most expensive areas to live in the world.

The average cost for a one-bedroom rental apartment in San Francisco is nearly $3,590 a month, according to the website Zumper. Prices are similar in many nearby communities.

That rent is even higher than New York City, the second-most costly market in the United States. Zumper reported this month that the average rent in New York for a one-bedroom apartment was $3,340.

California renters can expect to pay a lot to live in places like San Jose, which is about 80 kilometers from downtown San Francisco. Across the bay in Oakland, some investors are buying up buildings and then turning them into high-priced apartments.

While rental costs go higher, evictions from rental housing is also a problem. Activists say some landlords have forced people to move from rental units so they can be offered to tech workers, who will pay a higher price.

Erin McElroy is with a group called the Anti-Eviction Mapping Project.

"Because landlords know that people can pay $3,000 or $4,000 a month, who work in these [technology] industries, affordable housing is being neglected and lost," she says.

The mapping project keeps records of evictions as longtime residents are forced out of rental properties.

Some groups and San Francisco Bay Area neighborhoods are looking for ways to control the rising cost of rental housing.

The International Hotel was home to many Philippine and Chinese-American residents. The old hotel was torn down in 1981, but rebuilt in 2005. Local Roman Catholic officials worked with community groups to create affordable housing in the area.

Some local governments are reacting, too. Oakland stopped rate increases for three months on its older housing in April. San Francisco activists want a similar law to help renters who are struggling with rental payments.

Tourism is another reason for the high real estate prices. San Francisco is a popular stop for both U.S. and overseas travelers. This puts a high demand for hotel, apartments, single-family homes and office space.

After San Francisco and New York, the top of most expensive U.S. cities for renters are Boston and Washington, D.C., says the Zumper website.

The world's most expensive city for housing is Singapore, according to a report by the Economist Intelligence Unit.

VOA's Mike O'Sullivan reported on this story for VOANews. Jim Dresbach adapted his report for Learning English. George Grow was the editor.

apartment – n. a rented room or set of rooms that is part of a building and is used as a place to live

realtors – n. people who act as agents for the sale and purchase of buildings and land

eviction – n. the act of forcing someone to leave a place

landlord – n. a person who owns a house or apartment and rents it to other people