High Cost of College Raises Questions about Return on Investment

Update Required To play the media you will need to either update your browser to a recent version or update your Flash plugin.
By Pete Musto
08 February 2020


When it comes to higher education in the United States, one of the biggest issues of discussion and concern in recent years has been cost.

Data from the U.S. Department of Education's National Center for Education Statistics suggests the average cost of college doubled between 1989 and 2016. The Federal Reserve Bank of St. Louis reports that average yearly earnings only rose about 8 percent in that time.

James Kvaal is the director of The Institute for College Access and Success. He told VOA that one of the main reasons for the cost increase is reduced government support for colleges and universities. This, in turn, has led schools to raise their prices.

Earlier this year, the Center for the Study of Education Policy at Illinois State University published a report on state spending on higher education. The report found a five percent overall increase in proposed spending throughout the country. That is the highest increase in eight years of growth.

But Kvaal argues this is still nowhere near the level it was 30 years ago -- or where it needs to be now. He notes that a lot of students still depend on loans to help pay for their education. To date, about 10 percent of student borrowers are in default. In other words, they are failing to make the necessary payments towards their debt.

"As a result, it makes going to college riskier than it should be," Kvaal said. "We know that can be the best investment you make over the course of your life...But because of the cost of college, too often students aren't able to complete [college] and they are left with debt they can't afford to repay." 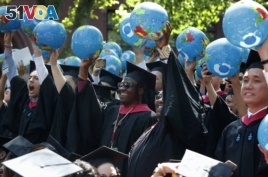 Other groups and experts suggest the situation is not as severe as it may seem.

The College Board is a not-for-profit organization that works to expand higher education in the United States. Last year, it published a look at changes in the average costs to attend American colleges and universities over the past 10 years. It reported that up until 2013, yearly average cost increases of five percent were common. But that is no longer the case.

"The point is that in recent years, tuition increases have slowed down considerably as the economy recovered [from the 2008 recession]," noted Jerome White. He is the director of media relations for the College Board.

Last November, Georgetown University's Center on Education and the Workforce published a study on return on investment in American higher education. It compared how much money students spent on their education at 4,500 different institutions to how much money they earned later in life.

Students who attended private colleges and universities made an average of about $73,000 more over 40 years than those who attended public schools. That was the case even after the cost of their education was subtracted from their career-long earnings.

Although while the immediate costs to attend a private U.S. university might be higher, the increased cost might be worth it, notes Martin Van Der Werf. He is associate director of the Georgetown center.

He says one reason these schools have better return on investment is their reputation. Many employers see well-known, highly selective institutions as offering the highest quality education available. This may not necessarily be true all the time, but it can make graduates of such schools seem more desirable.

In addition professional connections between former students and recent graduates are often especially strong at private schools. This means graduates of such schools who enter the labor market may have more support during their job search.

The selectiveness that makes these schools so well known and well respected, however, creates its own form of inequality, Van Der Werf says.

"These colleges pay off well if you can afford to go there and if you can get in. But the fact ... is, the vast majority of people can't do either: they can't get in and they can't afford to pay for it," he said.

Some of the most costly private colleges in the U.S. do offer financial aid or reduced tuition based on a student's level of need. But Van Der Werf argues these schools still mainly serve wealthy white students more than they do any other group of people.

To improve equality, Kvaal and Van Der Werf say state officials should aim to keep increasing financial support for public colleges and universities. And they say people in charge of those schools should make greater efforts to help their graduates find good jobs and careers.

Pete Musto reported this story for VOA Learning English. Ashley Thompson was the editor. Write to us in the Comments Section or on 51VOA.COM.

the course of – n. used to describe what happens during a period of time or when something is being done

afford – v. to be able to pay for (something

reputation – n. the common opinion that people have about someone or something selective – adj. careful to choose only the best people or things