Update Required To play the media you will need to either update your browser to a recent version or update your Flash plugin.
By Kim Varzi
19 October, 2012

High-level delegations met in Bamako, Mali for talks on the crisis in the country's north. Representatives from the United Nations, African Union and the Economic Community of West African States met with Malian leaders to develop a plan.

Mali's temporary president Dioncounda Traore urged representatives to act immediately to deal with the situation. He promised that the government would cooperate and work together with forces assisting in ousting the Islamic militants from the north.

Mali fell into a crisis in March, twenty-twelve, after the military ousted President Amadou Toumani Toure. Shortly after, Islamic militants with ties to al-Qaida seized control of the north. The militants want to enforce a severe version of Islamic law there. Recent reports from the north have documented human rights abuses by the militants. They perform public executions, use children as soldiers and force women into sex work. Women in many towns are forced to cover their faces and are banned from appearing in public with men. Smoking and music are also prohibited. 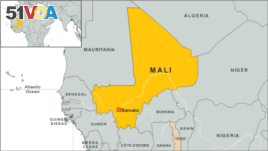 Map of Mali
The U.N. has been calling on ECOWAS to provide a more detailed plan for its proposed military action in northern Mali. Last week, the U.N. Security Council passed a resolution clearing the way for deployment of the ECOWAS force. It gave African leaders forty-five days to create a military intervention plan.

The newly appointed chairperson of the African Union Commission, Nkosazana Dlamini Zuma, said she would deal first with Mali after being sworn in. In Bamako, she said it was her first official trip as a messenger of solidarity from the African continent to the Malian people.

"I also want to highlight the AU's deep concern about the prevailing situation and the AU's determination to do everything in our power to help the people of Mali to find a speedy resolution of the overlapping crises in their country."

The U.N. Security Council will hold a second vote to approve or disapprove a military intervention plan once it is created. However, many people in Mali oppose foreign intervention.

Hundreds of Malians marched in Bamako this week to protest the idea of ECOWAS' military deployment.

The protest was organized by supporters of former army members who ousted the government. Many Malians say they are concerned that the army is disorganized and poorly equipped to take back the north alone.

Last week, thousands of Malians marched in support of ECOWAS troops in Mali. A Malian living in the northern city of Gao says military intervention is necessary.

He also says the people in the north have suffered enough, and it is time for war in order to clear the path.

There is also concern that military intervention could push Islamic militants and more refugees into neighboring countries.

And that's IN THE NEWS in VOA Special English, written by Kim Varzi. I'm Steve Ember.