Update Required To play the media you will need to either update your browser to a recent version or update your Flash plugin.
By Jonathan Evans
15 January, 2018


A new study shows that patients in African hospitals are two times as likely to die after doctors operate as the average death rate worldwide.

More than 30 African researchers worked on the study. They examined records for all operations performed during a one-week period at 247 hospitals in 25 African countries.

The researchers noted that while African patients were usually younger and at lower risk than average, 1 percent died of problems after elective surgery. The death rate worldwide is 0.5 percent. 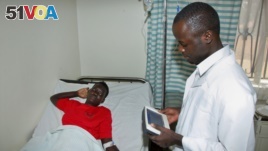 Bruce Biccard of the University of Cape Town was the lead writer of the study. He said, "It's really concerning when you see how high the mortality is, considering that the patients are generally fit and they're having a lot more minor surgeries."

Biccard and the other researchers wrote that workforce and resource shortages across Africa are likely to affect patient deaths. Their findings were published in the journal The Lancet.

In addition to the high death rate, the report said, "the most alarming finding was how few people actually received surgery." Experts have estimated that 5 percent of the population needs surgery in a year. African hospitals on average performed less than one-twentieth of that number.

The report noted that patients were receiving surgery later in the course of their diseases. Nearly 60 percent of the operations were urgent or emergency treatments. In industrial countries, the rate is about 25 percent.

Most of the patients who died did so in the days after their surgery, not during the operation.

Biccard noted that increasing the number of doctors is an unlikely short-term solution. His group is working on a method "that will tell us before surgery which patients we think are going to get into trouble."

The group is planning another study in 2019.

Steve Baragona reported this story for VOANews. Jonathan Evans adapted his report for Learning English. George Grow was the editor.

anesthesiologist – n. a doctor who specializes in administering drugs that cause a person to lose feeling and to feel no pain in part or all of the body

obstetrician – n. a doctor who specializes in a branch of medicine that deals with the birth of children and with the care of women before, during, and after they give birth to children

surgery – n. a medical operation performed by a doctor or team of doctors

mortality – n. the number of deaths in a given time or place

resource – n. a supply of something; the ability to meet and deal with something

course – n. movement from one point to another; an orderly series of actions