High School Completion Rates Fall in US during Pandemic

Update Required To play the media you will need to either update your browser to a recent version or update your Flash plugin.
By Dan Novak
01 February 2022


High school graduation rates in the United States dropped in at least 20 states after the first full school year during the coronavirus health crisis.

The information comes from the publication Chalkbeat. It suggests that the pandemic may have ended almost 20 years of improvement in high school graduation rates in America. Graduation rates fell in some states even though educators eased requirements to help struggling students.

The information comes from only 26 of the 50 states. But it is the latest concerning trend in education. Last year, many students attended classes online and the new coronavirus continues to affect learning and teaching. Educators fear that the next several graduating classes could be affected even more. 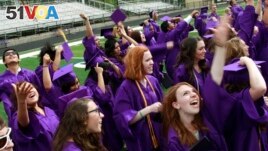 Graduates throw their mortarboards into the air in celebration after receiving their diplomas, following the commencement ceremony at Boulder High School, in Boulder, Colo. on Saturday May 18, 2013. (AP Photo/Brennan Linsley)

In 2020, when schools closed for the final months of the school year, most states eased graduation requirements. They reported a rise in graduation rates. But the results were different for the class of 2021. In 20 of 26 states that have released their information, graduation rates fell. The Associated Press reports that complete national data will likely not be available until 2023.

Those deceases were less than a percentage point in some states, like Colorado, Georgia and Kansas. But, in other states, they were larger. Illinois, Oregon and North Dakota reported graduation rate decreases of two percentage points. Indiana, Maine, Nevada, South Dakota and West Virginia reported drops of at least one point.

Where rates did increase, growth was small. Florida has had graduation rates increase by more than 2 percentage points every year for 10 years. But in 2021, it gained just one tenth of a percentage point.

Robert Balfanz is an education researcher with Johns Hopkins University in Maryland. "We do have to be concerned that grad rates are down and that some number of kids that earned a diploma, they've learned less than prior years," he said.

Carly Lott is a counselor at a school in in Reno, Nevada. She became concerned last year when students started working 40 to 50 hours a week. Some students worked during remote school days, while others took late-night hours that made them too tired to do schoolwork.

Graduation rates across the whole country are still higher now than they were a few years ago. But the decreases are troubling to many people.

In 2001, an estimated 71 percent of U.S. students who started public high school graduated four years later. By 2019, that number had risen to 86 percent.

Observers say that increase is a great success in American education. A study by the Brookings Institution suggested that the increases were the result of new pressure on states and schools from the federal government. The study found little evidence that the long-term improvements were caused by lowering graduation requirements.

Some fear that all the effects of the pandemic will hit future graduating classes hardest. In both Oregon and Nevada, the share of first-year high school students who finished last school year in a position to graduate was about 10 percentage points lower than before the pandemic.

Educators are hopeful, however, that last year's drop is not the sign of a trend. In Peoria, Illinois, the graduation rate fell four points after rising for years. But Superintendent Sharon Desmoulin-Kherat said the school system is expanding measures for struggling students.

Every week, a team of educators finds students with failing grades and provides them extra support. The school system has added ways working students can earn credits in the evenings or on weekends. It has also employed workers to help students who are in the juvenile justice system to finish school.

"It is not easy," Desmoulin-Kherat said. "It's definitely a marathon, not a sprint." That means the effort is unlike a short race, but more like a long, difficult one.

graduation –n. the act of receiving a diploma or degree document from a school, college, or university proving you have completed studies there; the act of graduating

trend –n. a general direction of change in something that takes place in or affects society

diploma –n. a document which shows that a person has finished a course of study or has graduated from a school

prior –adj. existing earlier in time

juvenile — adj. related to young people who are not yet legally adults