Update Required To play the media you will need to either update your browser to a recent version or update your Flash plugin.
By Susan Shand
07 May 2020


High-speed internet service is helping people to guard against COVID-19, the disease caused by the new coronavirus. Many people have come to depend on high-speed internet to work from home, take part in online classes and get the latest news.

In Kashmir, however, Indian government officials are enforcing a ban on the technology. News reporters say the ban is preventing people from learning or sharing important information about the virus.

Kashmiris were cut off from the internet for seven months after the government ended the state's right to self-rule last August. In March, internet service was reestablished. But Indian officials limited mobile phones to 2G service. 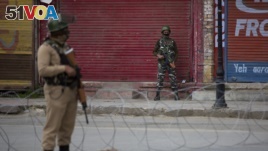 India claims control of about 60 percent of the former state of Jammu and Kashmir. Pakistan and China control the rest.

At a court hearing on Monday, the Jammu and Kashmir government said the 2G service was good enough. Government lawyers warned that high-speed internet could be misused to spread false news or help terrorists plot attacks.

Bilal Hussain is a Kashmir-based reporter. He told VOA the ban on high-speed internet has caused problems for doctors and the local media.

"We are forced to work on 2G...doctors in Kashmir are not even able to download material they need for COVID-19," Hussain said.

Reporters can be arrested for going against the "state narrative," he added.

Indian officials have brought charges against at least four reporters in Kashmir since the government announced measures to control the spread of the coronavirus.

Gowhar Geelani is one of the four.

"The aim seems to be to control the narrative," he said.

The lack of high-speed internet during the coronavirus pandemic is "aiding its spread and gambling with people's lives," Access Now says. The rights group has been following events in Kashmir since last August.

As of Tuesday, India has reported 46,711 cases and 1,583 deaths from the virus. It said Jammu and Kashmir has a total of 726 cases and eight deaths.

Samuel Woodhams is a London-based digital rights researcher. He said that 2G is "ineffective" in a world where many countries use 4G or 5G.

Woodhams said that India's decision to slow internet connections is simply a way to avoid public and international scrutiny.

"Governments can claim that it isn't an internet blackout," he said.

Prime Minister Narendra Modi has said that the internet blackout that lasted until March was to prevent the spread of terrorism.

Aliya Iftikhar with The Committee to Protect Journalists told VOA that it appears the Indian government is trying to use the pandemic "to distract from what they are doing in Kashmir."

ugly – adj. unattractive to look at

pandemic – n. an illness that travels from one country to another

gamble – v. to play a game in which you can win or lose money or possessions

digital – adj. of or relating to information that is stored in the form of the numbers 0 and 1

scrutiny – n. Looking closely at something

blackout – n. to remove all lighting or technology