Update Required To play the media you will need to either update your browser to a recent version or update your Flash plugin.
By John Russell
04 July, 2017


Researchers are hoping to bring technology to small farms in developing countries.

Ranveer Chandra works for Microsoft Corporation, the American technology company. Chandra grew up in India. He remembers spending four months a year on his family's farm.

"There was no water," he said. "No electricity. No toilets."

Animals pulled plowing equipment through fields, as they have for centuries. 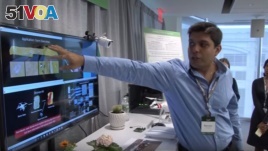 Now, Chandra – like many other researchers - wants to bring technology to small farms.

Their goal is this: to feed the world without destroying the planet.

What is precision farming?

Precision agriculture is a method of growing crops. Farmers use technology to collect very precise or exact measurements about their land. It tells farmers how they planted seeds, used fertilizers and chemical pesticides, and so on.

The main idea of precision farming, notes the Crop Society of America (CSA), is that there are natural differences in the soil – even in the same field. Farmers who understand these differences are better able to produce crops.

Precision farming is fairly new in the United States, says the CSA. It began in the 1990s. At that time, Global Positioning System (GPS) technology became available to the public.

GPS technology is able to show your exact positions on earth.

GPS information can tell farmers where they planted seeds, used fertilizers, chemical pesticides, and so on.

In many areas, farmers do not use high-tech equipment. Often in those places, crop production levels are low.

Now, high-tech tools are bringing a new level of precision to large-scale agriculture.

Some of this technology is too costly for small farmers, especially in developing countries.

Artificial intelligence on the farm

Ranveer Chandra, the Microsoft researcher from India, is working to develop low-cost, high-tech tools for farmers.

Some hospitals and schools in rural areas are already online with white-space connections, Chandra noted.

Each soil sensor provides information about conditions on the farm. To connect all the areas into a big picture, a drone aircraft takes photographs from high in the air.

Artificial intelligence (AI) compares these aerial photos to the sensor data. AI then can create maps of where the soil is too acidic or needs more water.

Chandra hopes to bring the cost of a simple system under $100. He notes the existence of low-cost replacements for the drones. A balloon tied to a mobile phone can serve the same purpose.

He added that Microsoft is considering different business models. Farmers could share a system, or a local farm business could rent systems to farmers.

Microsoft is just one company that sees agriculture as an area of growth for technology.

Google invested in a small company that gathers farmers' data on how different crops perform from farm to farm and year to year.

Many other companies are trying to enter the high-tech farm business, notes John Fulton of Ohio State University.

"Everyone's trying to figure out how they play in agriculture," he said. "We're really at an early stage of this digital agriculture revolution."

Demands on agriculture are increasing. As the world's population grows, farmers will need to make more food without cutting down more forests or polluting the land and water.

To do that, existing farms need to produce more crops.

Chandra says that what farmers need is more information, so they can give the land what it needs.

However, the level and speed at which new farming techniques and technologies will spread remains unclear.

Bruce Erickson is a precision farming expert at Purdue University in Indiana. He told the CSA that one problem faced by any new farming technology is getting people to use it with their existing methods.

precision – n. exactness; the quality of being exact

toilet – n. a device for removing waste fluids and body waste from the home

large-scale – adj. of or related to a large area; involving many people or things

pesticide – n. a chemical that is used to kill harmful insects or animals

channel – n. frequencies used by a single radio or television station to broadcast

broadband – adj. of or related to a high speed communications network

drone – n. a small aircraft that flies without a pilot

implement – v. to begin to do or use (something, such as a plan); to make (something) active or effective