Update Required To play the media you will need to either update your browser to a recent version or update your Flash plugin.
By Jonathan Evans
07 December, 2014


Researchers at Stanford University have developed a new material that can move heat out of buildings and into space. The researchers say the material can cool buildings even on hot days.

The cooling material is a very thin sheet with many layers that could be placed on a roof like solar panels. However, instead of turning sunlight into energy as solar panels do, the material turns heat into infrared radiation. 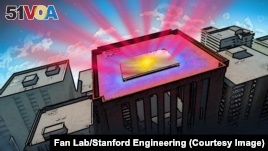 This illustration shows a reflective panel that is coated with a material invented by Stanford engineers, designed to help cool buildings without air conditioning. (Fan Lab, Stanford Engineering)

"It's a structure that cools itself without electricity input, even under the sun. So, what it does is basically radiate heat to outer space and also reflect the sunlight so it doesn't get heated up by the sun. And the net result is you get something that if you put on the roof will have a temperature below ambient air temperature by a significant amount."

The panels are cool to the touch, even in the sun. Researchers say they can reduce the indoor temperature to nearly 5 degrees Celsius below the temperature outside.

Mr. Fan says it is like having a window into space. He says the heat is sent directly into space without warming the air.

He says buildings in developing countries that do not have electricity or air conditioning could use the panels.

"In areas where one is off-grid, there is a significant potential benefit for storing medicine or even food. In many of these situations, being able to reduce the temperature is important. And this would provide a way to do it."

The Stanford researchers described their technology in the science publication Nature. They say the main problem is creating actual cooling systems using the high-tech panels. They say it may be possible to develop a cooling spray that could be used on existing solid structures.

The researchers believe the cooling spray technology could be developed in the next three to five years. They say as much as 15 percent of the energy used in the United States is spent providing power to air conditioning systems.

air conditioning – n. a system used for cooling and drying the air in a building, room, etc.

radiation – n. energy that comes from a source in the form of waves or rays you cannot see