Update Required To play the media you will need to either update your browser to a recent version or update your Flash plugin.
By Susan Shand
09 March, 2019


Until recently, only highly educated individuals could understand the policy statements of the United States Federal Reserve Board.

The Fed's policy statements grew longer and the wording became more complex after the recession in 2008. One study even suggested that people needed four years of university studies, or more, to understand them.

The Reuters news agency says that is changing. 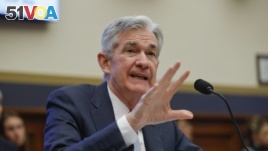 Federal Reserve Board Chair Jerome Powell speaks to members of the House Committee on Financial Services on Capitol Hill in Washington, Feb. 27, 2019.

Jerome Powell became chairman of the U.S. central bank in February 2018. Since then, the statements have grown less complex and comments made at press conferences are easier to understand, a Reuters study found.

The Federal Reserve's job is to guarantee a safe monetary and financial system. Every eight weeks or so, its main group, the Federal Open Market Committee meets to discuss the health of the U.S. economy. Then it releases a statement about economic conditions. Its comments are studied by economists, investors and governments around the world.

The change in policy statements comes from Powell's decision to make the Fed's communications easier to understand. It also comes from the decision by the bank to end a period of low interest rates and complex financial instruments that were used to support economic growth.

Experts say the simple language may keep financial markets calm because it will remove questions about the bank's decisions. Others say it may have the opposite effect because speaking simply also has risk.

The wording of statements

The formula judges how often a document uses big words and long sentences. It decides the level of education a reader needs to understand the statement.

From the beginning of the 2008 recession until late 2013, the formula found that a reader needed more than four years of college to understand Fed statements. It said that readers needed a PhD, the highest university degree available.

In 2014, Janet Yellen was appointed head of the Federal Reserve. During her leadership, the formula found that a reader needed at least a university degree to understand Fed statements.

Under Powell's leadership, the statements are much easier to understand. The formula found that the average person required a little higher than a high-school reading level.

Researchers believe that in the past that more difficult Fed language led to sharp moves in the value of stock shares. But no one knows if easier to read Fed statements will cause stock market volatility to stop.

"You would expect less volatility from a drop in (difficulty)," said Charles Calomiris, an economist at Columbia University in New York. He was explaining the drop in the Flesch-Kinkaid reading levels identified by Reuters.

Calomiris noted, however, that it is difficult even for experts to understand market movements and measure changes in the Fed's language.

In fact, stock market volatility has increased in recent months. Investors are worried about the direction of Fed policy and the international economy.

David-Jan Jansen is an economist at the Dutch central bank. He found evidence that some interest rates were less likely to change up or down after Powell presented easy-to-read statements to Congress.

"It's not just what you say. It is how you say it," said Jansen.

Yet Jansen and Calomiris both noted a serious problem with the readability study: It does not consider the meaning of the words being used. It only considers the level of education a reader needs to understand them.

So a Fed statement with bad news will cause market volatility if the words are easy to understand or not.

A Fed spokesman would not comment on the Reuters findings.

Powell said last month that he writes his statements so they can be understood by many people, not just Wall Street and international economists.

"You just have to say it in a way that's more accessible," Powell said at a meeting with educators.

Powell's statement last September said that the U.S. economy was simply strong and interest rates were set to rise. That was easy enough for a U.S. high school student.

But in January, Powell's statement became more difficult for readers. That was when the bank stopped raising interest rates because it was worried about the American economy.

The Reuters News Agency reported this story. Susan Shand adapted it for Learning English. The editor was George Grow.

complicated – adj. hard to understand, explain, or deal with

formula – n. a plan or method for doing or making something

degree – n. an award presented by a college or university after completion of a study program

volatility – n. likely to change in a very sudden or extreme way

accessible - adj. able to be reached