Update Required To play the media you will need to either update your browser to a recent version or update your Flash plugin.
By Hai Do
12 April, 2015


"I'm running for president." Hillary Clinton kicks off her anticipated campaign for the presidency with a video posted on YouTube.

With her second run for the White House, the former first lady and Secretary of State is hoping to become the first female president of the United States. In the campaign video, she says, "Everyday Americans need a champion. I want to be that champion."

Ms. Clinton is expected to visit the early voting states of Iowa and New Hampshire shortly with a message of economic equality. She says, "So I'm hitting the road to earn your vote. Because it's your time. And I hope you'll join me in this journey."

Ms. Clinton enters the 2016 presidential campaign as a favorite to win the Democratic nomination. Former Maryland Governor Martin O'Malley and former Senator Jim Webb of Virginia are potential rivals, but neither has received much in the way of campaign contributions or support from the party.

Charlie Cook of the Cook Political Report said, "In some way, Hillary is running against herself. She's got to show herself relevant in the 21st century."

However the road to victory for Ms. Clinton will not be easy. 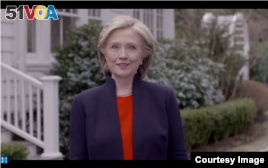 Hillary Clinton announces her 2016 campaign for the White House.

On the Republican side, Senators Ted Cruz of Texas and Rand Paul of Kentucky have already announced their candidacy.

There are many more Republicans getting ready to challenge Ms. Clinton. They include former Governor Jeb Bush and Senator Marco Rubio of Florida, Governor Scott Walker of Wisconsin, Governor Chris Christie of New Jersey, and former Governor Rick Perry of Texas. Even former business executive Carly Fiorina said that she is "seriously considering running."

Ms. Clinton has been a well-known figure in American politics for more than two decades since her husband, Bill Clinton, was elected to the White House in 1992. As first lady, Ms. Clinton led the failed effort to provide national health care. She later won an election to represent New York as a U.S. Senator prior to becoming Secretary of State.

Political analyst Stuart Rothenberg feels Ms. Clinton's negative is her age. She's 67 and would be close to 70 if she were to take the presidency. Her announcement on YouTube is an attempt to reach out to young voters. Mr. Rothenberg noted, "We are a country and a culture these days where 15 minutes ago is ancient history, and voters always want something new and fresh."

During an appearance on ABC's This Week, former Governor O'Malley emphasized this point saying, "the presidency of the United States is not some crown to be passed between two families."

Ms. Clinton once famously said that her family was a target of the so-called "vast right-wing conspiracy."

A recent Congressional inquiry on Benghazi, Libya revealed that Ms. Clinton used a private email server to conduct government business as Secretary of State. Ms. Clinton insisted that she did not violate any rules by using the private email, but Republicans were quick to denounce the practice. Senator Rubio of Florida said that, "If there was anything in those emails that was sensitive in nature, not just classified, God forbid, even sensitive, I think it puts national security at risk." Senator Rubio is planning to announce his own run for the White House later this week.

The Clinton Global Initiative is a philanthropic foundation established by the former president and his family to improve the lives of people around the world. The foundation has accepted donations from foreign countries including Saudi Arabia, Kuwait, Australia, Norway and the Netherlands.

Republican Senator Rand Paul, an announced candidate for the White House, criticized the foreign donations. In an interview with Politico, he said, "In countries that stone people to death for adultery and imprison people for adultery, this is the kind of thing you would think someone for women's rights would be standing up against, instead of accepting thinly veiled bribes."

Ms. Clinton possesses some advantages over other candidates in the campaign for the presidency. "She's got experience, both domestic and foreign policy," political analyst Stuart Rothenberg said. "She got rave reviews in terms of her energy and her enthusiasm in the work she did as Secretary of State, and that's a plus. Frankly, she's a woman, and that's a huge asset."

Despite the email and foreign donations controversy, the former Secretary of State still leads all potential rivals according to the Washington Post-ABC News poll taken at the end of March.

Professor Larry Sabato, of the University of Virginia's Center for Politics, said that the early polls are "worthless." He added "it's impossible to project a general election for president yet. That depends on events that haven't happened, that depends on how popular or unpopular President Obama, the incumbent Democrat is in the fall of 2016. It depends on where the economy is. It depends on whether we are in a hot war or not. There are too many unknowns for anyone to project the 2016 election, that is anyone who has any sense."

When Ms. Clinton ran for the presidency in 2008, she led then-Senator Obama by as many as 33 points in the same poll.

Hai Do wrote this story for Learning English with additional materials from Sharon Behn, Katherine Gypson and Anne Ball. James Tedder was the editor.

favorite – n. a person most likely to win

rivals – n. something or someone that is as good or almost as good as another person or thing

inquiry – n. an official effort to collect and examine information about something