Update Required To play the media you will need to either update your browser to a recent version or update your Flash plugin.
By Bryan Lynn
09 November, 2016

Most political experts and voter studies had predicted Clinton would win the election. But after very close voting in many states across the country, Trump received the required 270 electoral votes early Wednesday to win the White House.

In a speech Wednesday to supporters, Clinton said she was "sorry" for the loss, which she described as "painful." But she said Americans owe Trump "an open mind and a chance to lead." 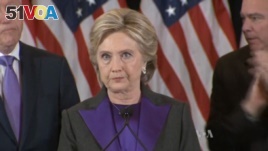 Clinton is a former secretary of state, U.S. senator and wife of two-term president Bill Clinton. She called Trump early Wednesday morning to congratulate him on his victory. She said that she told him she would work with him for the good of the country. She said America is "more deeply divided than we thought."

Clinton said she hopes Trump "will be a successful president for all Americans." She urged her supporters to "please never stop believing that fighting for what's right is worth it."

If she had won, Clinton would have become the first female president of the United States. During her speech, she said she was disappointed she had not "shattered that highest and hardest glass ceiling."

She also spoke directly to young girls and women watching her speech.

"Never doubt that you are valuable and powerful and deserving of every chance and opportunity in the world, to pursue and achieve your own dreams."

During his acceptance speech to supporters early Wednesday, Trump congratulated Clinton on her campaign effort.

"Hillary has worked very long and very hard over a long period of time, and we owe her a major debt of gratitude for her service to our country. I mean that very sincerely."

The president-elect also called on all Americans to unite.

"To all Republicans and Democrats and Independents across this nation, I say it is time for us to come together as one united people. It's time."

Trump's victory ended one of the most divisive presidential campaigns ever. Both Clinton and Trump repeatedly said the other candidate was unfit to serve as president.

The win also ends eight years of Democratic Party rule in the White House. Political experts have said the change could lead to the undoing of many of President Barack Obama's policies.

Obama said Wednesday he had congratulated Trump by phone and that he will meet with him Thursday at the White House.

Obama promised a smooth change of leadership. He also urged the country to join him in supporting Trump's efforts to succeed as president. "We all want what's best for this country," he said.

"We try really hard to persuade people that we're right, and then people vote. And then if we lose, we learn from our mistakes. We do some reflection, we lick our wounds, we brush ourselves off, we get back in the arena. We go at it. We try even harder the next time."

House of Representatives Speaker Paul Ryan, who leads the Republican majority in the House, said Trump had managed to win a great political battle.

Ryan was slow to back Trump's candidacy and had publicly disagreed with him on several issues. But on Wednesday, he said he was "excited" about working with him.

Bryan Lynn wrote this story for Learning English based on reports from VOA News, the Associated Press and Reuters. Caty Weaver was the editor.

concede - v. to admit that you have been defeated and stop trying to win

disappointed – adj. unhappy about something that didn't meet expectations

shatter – v. to break up

glass ceiling – n. unfair barriers that block people, especially women, from getting the most powerful jobs

pursue – v. to try to do something over time

gratitude – n. showing thankfulness to someone for a helpful act

arena – n. involved in the area of politics