Update Required To play the media you will need to either update your browser to a recent version or update your Flash plugin.
By Caty Weaver
02 August, 2012

I'm June Simms. This week, we look at plans for a just announced music festival at an unusual location in New York City. 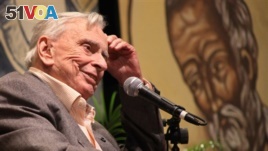 Gore Vidal in 2009
But first, a look at the social and economic success of Hindus in the United States.

FAITH LAPIDUS: The new report is called "Asian Americans: A Mosaic of Faiths." It comes from the Pew Forum on Religion and Public Life.

Researchers found that eighty-five percent Hindu Americans have completed study programs at a college or university. The report says fifty-seven percent have some education beyond that. And it says almost fifty percent of Hindu Americans have yearly earnings of one hundred thousand dollars or more. Seventy percent make at least seventy-five thousand a year.

The number of visas provided to Indians grew throughout the nineteen nineties and early two thousands. It rose again in two thousand seven. The Pew report says Indians received more than half of all H1-B visas approved last year.

Alan Cooperman served as director of research for the study. Mister Cooperman says Hindu success in America is linked to the kind of person who chooses to leave India and the foreigners the United States admits. He said Indian immigrants are less likely to be refugees or undocumented workers compared with other immigrant groups.

Mister Cooperman is excited about the study. He says this is the first time anybody has had really detailed information on Hindus in America. And, he says, Hindus are an extremely interesting group.

JUNE SIMMS: The literary world lost a major star this week. Writer Gore Vidal died Tuesday at his home in Los Angeles, California. He was eighty-six.

Gore Vidal wrote fiction and non-fiction and covered a huge expanse of subjects, including politics, history and social issues. His books "Burr" and "Lincoln" were among his best-selling novels.

Vidal was also known for his heated public disagreements with other notable writers and thinkers including Truman Capote, William F. Buckley and Norman Mailer.

Gore Vidal was born in nineteen twenty-five in West Point, New York. His father taught at the United States Military Academy. His mother's father was a United States senator.

Gore Vidal began writing while serving in the army during World War Two. His first novel "Williwaw" was published in nineteen forty-six. He was just twenty years old.

Vidal's third novel "The City and the Pillar" explored the experience of a young man who discovers he is homosexual. It was published in nineteen forty-eight and was criticized by some for its subject.

Vidal began writing television dramas in the nineteen-fifties. One, called "Visit to a Small Planet," was turned into a successful Broadway play and movie. It was a humorous look at life in America during its "Cold War" with the former Soviet Union.

In the nineteen-sixties, Vidal wrote what became his best-known novel, "Myra Breckenridge."

Gore Vidal was known for thinking very highly of himself but with a sense of humor. He once said "there is not one human problem that could not be solved if people would simply do as I advise."

JUNE SIMMS: American Stephen Colbert has hosted a talk show on Comedy Central television since two thousand five. His "Colbert Report" is popular and extremely influential among young people. Colbert is a music lover. This week, he announced plans for a summer concert. Christopher Cruise has more on the show.

Colbert said he and concert goers would be "on deck with a boatload of rock talent."

The band fun. will be among the musicians. Here they perform "We Are Young" -- one of the most popular songs of this summer.

The name "Colbchella" is supposed to be funny. It combines the name Colbert with Coachella. Coachella is a successful music festival that takes place every spring in California. This year, Santigold was among the performers. Stephen Colbert also asked her to perform at the "Rocktaugustfest."

Santigold's most recent album, "Master of My Make-Believe" was released in April. "Disparate Youth" was a popular song from the recording.

The Flaming Lips and Grizzly Bear are also set to perform. Grizzly Bear has announced plans to release a new album, "Shields," in September. "Sleeping Ute" is one of the album's singles.

One of the early performers of rap music is also invited to Colbchella. Here is how Steven Colbert made that announcement earlier this week.

STEPHEN COLBERT: "And...the official Colbchella aircraft carrier-based deejay is the inventor of the cross-fade, perfector of the scratch: Grandmaster Flash. Don't push him cause he's close to the edge, and on the Intrepid the edge is like a fifty-foot drop."

We leave you with Grandmaster Flash and the Furious Five performing the nineteen eighty-two hit, "The Message."