Update Required To play the media you will need to either update your browser to a recent version or update your Flash plugin.
By John Russell
19 December 2022


Negotiators at a United Nations environmental conference in Canada reached a historic deal Monday. It aims to protect the world's lands and oceans and provides financing to save biodiversity in the developing world.

The agreement came on the final day of the U.N. Biodiversity Conference, or COP15, in Montreal.

China, the president of COP15, offered a proposal Sunday that helped the negotiations move forward. Chinese Environment Minister Huang Runqiu spoke about it to the delegates. He said he believed the deal, in his words, "can guide us as we all work together to halt and reverse biodiversity loss and put biodiversity on the path to recovery...." 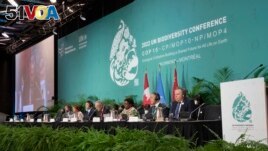 The head table gets set to open the high level segment at the COP15 biodiversity conference, in Montreal, Thursday, Dec. 15, 2022. (Ryan Remiorz/The Canadian Press via AP)

Huang said that would be good for all the world's peoples.

The agreement's most important term is known as 30 by 30. It is a promise to protect 30 percent of land and water considered important for biodiversity by the year 2030. Currently, such protection covers 17 percent of land.

The deal also calls for raising $200 billion by 2030 for biodiversity financing from a number of sources. In addition, another goal is to work to end or change subsidies that could provide another $500 billion for nature. As part of the financing, the deal calls for increasing the money that goes to poor countries to at least $20 billion each year by 2025. That number would increase to $30 billion each year by 2030.

Disputes about financing a deal threatened progress late in the talks. Several African countries held up the final agreement for many hours.

But, Huang pushed aside the opposition and the documents that make up the agreement were adopted. A COP15 legal expert ruled that Congo, one country that expressed opposition, never officially objected to the document. Several other African countries, including Cameroon and Uganda, supported Congo's position and said they would make an official complaint.

"It's not a small deal," he said. He added that there are now goals expressed for agriculture industry poisons, bad subsidies, and species loss.

Pierre du Plessis, a negotiator from Namibia, told the Associated Press before the vote, "Everyone got a bit of what they wanted, not necessarily everything they wanted."

There were supporters of the deal who said it fell short in several areas.

The Wildlife Conservation Society and other environmental groups were concerned that the deal puts off some goals until 2050. They fear that is not quick enough.

Some groups also wanted tougher language around subsidies that make food and fuel so cheap in many parts of the world.

Michael Casey reported on this story for the Associated Press. John Russell adapted it for VOA Learning English.

subsidy – n. money that is paid usually by a government to keep the price of a product or service low or to help a business or organization to continue to function

complaint – n. a statement that you are unhappy or not satisfied with something