Update Required To play the media you will need to either update your browser to a recent version or update your Flash plugin.
By Dan Friedell
07 October 2021


The recent oil spill off the California coast has environmental activists once again asking for a ban on drilling.

While new oil drilling leases have not been given for about 50 years, a large number of existing wells are still being used. In addition, the state is still giving permits for drilling in the waters covered by the old leases.

The United States government, as well, is looking to stop selling drilling leases in federal waters near California. But none of the current oil wells will be asked to stop production.

He said the state needs to find a way to close the oil wells, but keep workers employed.

He called it "the deeper question."

There are over 1,200 active oil and gas wells off the coast of California. Earlier this month, one of the pipelines run by an energy company in Houston, Texas, broke and spilled over 500,000 liters of oil.

Newsom said the spill created a sense of urgency to end the oil and gas drilling business in California. While many people would like to see it stop, the state economy depends on drilling. It is the seventh-largest oil producing state and there are 150,000 workers.

Newsom said the state needs to stop thinking that oil and gas production are part of the future. "This is part of our past," he said.

Newsom noted that he is working to reduce the state's oil use by banning the sale of gas-powered cars after 2035. In addition, the state says it will end oil production by 2045. 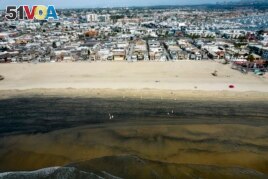 In this aerial image taken with a drone, workers in protective suits clean the contaminated beach after an oil spill in Newport Beach, Calif., on Wednesday, Oct. 6, 2021.

A group called the FracTracker Alliance has research showing there are close to 1,200 active wells. About 1,300 other wells are no longer being used. Newsom's government permitted five new wells to open since 2019.

Closing wells is costly. For example, in an area close to Long Beach, known as the Wilmington Oil Fields, it will cost about $800 million. The state, however, only has $300 million saved for the job.

Deborah Sivas is an environmental law professor at Stanford. She called the old oil platforms "fragile" and noted that many of the structures were built 50 years ago and have reached the end of their lifespan.

She said the state is being inconsistent by putting forward environmental rules while also issuing new drilling permits.

The problem has hurt politicians for years. Many California voters are in favor of environmentally-friendly regulation. But political leaders think cutting oil production will hurt the economy in both California and the U.S.

Alan Lowenthal represents the area of southern California closest to the spill in the U.S. Congress. He said the state needs to make a "plan to not only stop new drilling, but to figure out how do we stop all drilling that's going on in California."

Newsom said he understands some people may be unhappy with the speed of well closures and drilling areas, but he is proud of the state's work.

How can California close oil wells in the ocean without hurting its economy? Tell us in the Comments Section and visit 51VOA.COM.

drill – v. to make a hole in something with a drill

lease – n. a legal agreement that lets someone use a car, house, etc., for a period of time in return for payment

well – adj. a deep hole made in the ground through which water (or oil) can be removed

pipeline – n. a line of connected pipes that are used for carrying liquids and gases over a long distance

inconsistent – adj. having parts that disagree with each other