Update Required To play the media you will need to either update your browser to a recent version or update your Flash plugin.
By VOA
08 April, 2016

This week, we visit one of the most unusual national parks in the United States. It is called the Dry Tortugas National Park. It includes seven small islands. They are about 200 kilometers off the coast of the state of Florida. One of the islands was once a prison.

The first European to see the small islands was the Spanish explorer Ponce de Leon. He arrived by ship in 1513. Ponce de Leon was an older man, who was searching for special water that stories said would make him young again. It was called the "Fountain of Youth."

Ponce de Leon named the islands the Tortugas. "Tortuga" is the Spanish word for "turtle." Thousands of turtles lived on the islands. Ponce de Leon was able to capture many of these creatures to provide meat for his ship's crew.

He never did find the "Fountain of Youth." In fact, the islands had no fresh water on them at all. The Tortugas were dry. The word "dry" began to appear on early maps of the area to warn ships that they could not find fresh water there.

Centuries later, America's third president, Thomas Jefferson, took an interest in the islands. He hoped they could become a place that could help protect ships traveling in a large area of water called the Florida Straits. He proposed a military base be built there.

In 1821, the United States took control of Florida and its islands. Construction on a military fort began in 1848, long after Jefferson's death. Fort Jefferson was never really completed. It had to be worked on continually. The salt air, wind, water and sand quickly caused problems. The weight of the fort's heavy brick walls made them sink into the sand.

Slaves and prisoners did the building and repair work at the fort. Many of the prisoners were army troops. They had been found guilty of crimes, and ordered to serve their sentences at Fort Jefferson.

In July of 1865, four new prisoners arrived at Fort Jefferson. They had been found guilty of taking part in the successful plot to murder the president of the U.S., Abraham Lincoln.

One of the prisoners was sentenced for giving medical aid to the man who killed President Lincoln. He was also found guilty of being an active member of the assassination plot.

That man was Samuel Alexander Mudd. He was a 32 year-old doctor from the state of Maryland. He was sentenced to spend the rest of his life doing hard labor at Fort Jefferson.

The walls at Fort Jefferson were about 15 meters tall. Inside the walls of the fort were hundreds of rooms. Most of them held huge guns that pointed out to the sea. Many other buildings were also inside the huge fort.

No prisoner had ever successfully escaped from Fort Jefferson. It was more than 200 kilometers across open ocean to the nearest occupied land.

Samuel Alexander Mudd must have believed the fort would be his home for the rest of his life. But he was wrong.

Later, the sickness seemed to leave the island. Many of those who survived knew they owed their lives to Doctor Mudd. Almost every man in Fort Jefferson wrote to the president of the United States asking that Mudd be pardoned because of his work treating patients who had yellow fever. They called Mudd a hero.

In February of 1869, President Andrew Johnson signed a presidential pardon. Mudd was a free man. He left Fort Jefferson and returned to his home in Maryland. He once again became a family doctor.

In 1874, the American army left Fort Jefferson. Modern artillery made the fort no longer useful.

Today the old fort and empty little islands provide a protected home for thousands of birds, fish and sea turtles.

Visitors travel for hours on high-speed boats that bring them to the islands from Key West, Florida. They swim in the warm waters and enjoy the bright Florida sun. Many try snorkeling or scuba diving to explore the underwater shipwrecks. Still others bring tents and spend a few days living on the white sand beaches.

The small island's days as a prison are long past. Yet almost every visitor to the park asks about its most famous prisoner, Doctor Samuel Alexander Mudd. They ask to see his room. Most people know that the doctor did not end up spending the rest of his life in the Fort Jefferson prison.

Only a few of the huge cannons remain at the park. They help show visitors what to old fort looked like. The weather continues to affect the fort's grounds and buildings. So workers continue to fight against environmental damage.

The park extends over an area of more than 26,000 hectares. Almost all of this is ocean and living coral reefs that protect the islands.

Many ships have sunk in the waters around the islands over the centuries. The wrecks of these ships help provide safe places for many fish. 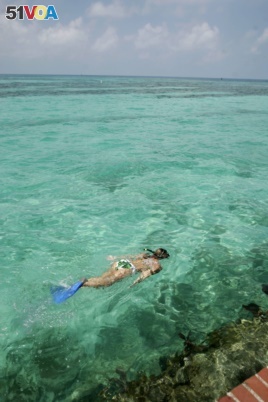 Snorkeling in the waters of Dry Tortugas National Park

Thousands of kinds of fish live in these waters. Some visitors are even lucky enough to see sea turtles swimming in the clear blue waters.

Dry Tortugas is also home to many seabirds. Visitors are not permitted on some of the islands within the park to protect birds that are laying eggs.

turtle - n. a reptile that lives mostly in water and that has a hard shell which covers its body

sink - v. to go down below the surface of water, mud, etc.

sentence - n. the punishment given by a court of law

yellow fever - n. a serious disease that causes fever and often yellowing of the skin and that is passed from one person to another especially by the bite of mosquitoes

pardoned - v. to officially say that someone who is guilty of a crime will be allowed to go free and will not be punished

snorkel - v. to swim while using a snorkel, a special tube that makes it possible to breathe with your head underwater.

scuba dive - v. to swim underwater using an air tank and a special breathing machine that you strap on your body