Update Required To play the media you will need to either update your browser to a recent version or update your Flash plugin.
By Frank Beardsley
24 August, 2013

Now, Words and Their Stories, a VOA Special English program about American expressions.

I'm Rich Kleinfeldt with some expressions containing the word "hit."

"Hit" is a small word, but it has a lot of power. Baseball players hit the ball. Missiles hit an airplane. A car hits a tree.

"Hit" also joins with other words to create many colorful expressions. One is "hit the road." It means to travel or to leave a place, as suggested in this song "Hit the Road."

Another common expression is "hit the spot." At first it meant hitting a spot at the center of a target with an arrow. Someone who did so was satisfied with his shooting. Now, hitting the spot usually means that a food or drink is especially satisfying. 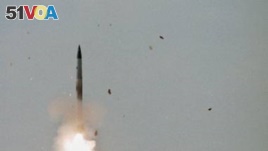 A round barn in Illinois

Many years ago, Pepsi Cola sold its drink with a song that began "Pepsi Cola hits the spot, twelve full ounces, that's a lot..."

Another expression involving hit is "hit bottom." Something that has hit bottom can go no lower. If the price of shares of a stock hits bottom that might be the time to buy it -- its value can only go up.

A student who tells you his grades have hit bottom is saying he has not done well in school.

Not hitting the books could lead to an unpleasant situation for a student. The father or mother may "hit the ceiling" when they see the low grades. Someone who hits the ceiling -- the top of the room -- is violently angry. A wife may hit the ceiling because her husband forgot their wedding anniversary.

To build something of wood, you usually need a hammer. That is what you use to hit nails into the pieces of wood to hold them together. When you "hit the nail on the head" -- exactly on its top -- it goes into the wood perfectly. And when someone says your words or actions "hit the nail on the head" he means what you said or did was exactly right.

If you are tired after hitting all those nails on the head, then it is time to "hit the hay." That expression comes from the days when people slept on beds filled with dried grass or hay. Some people slept on hay in barns where they kept their farm animals.

Hitting the hay simply means going to bed. That is a good idea. I think I will hit the hay now.

This VOA Special English program Words and Their Stories was written by Frank Beardsley.