Update Required To play the media you will need to either update your browser to a recent version or update your Flash plugin.
By Kelly Jean Kelly
29 August, 2014


An increasing number of young people in Thailand are becoming infected with HIV, the virus that causes AIDS.

The United Nations Childrens Fund released a report about HIV on August 25th. The report said people in Thailand between the ages of 15-24 have about 70 percent of the HIV infections caused by sex.

Researchers gathered information from almost 2,000 young people in Thailand who are members of groups that have a higher risk of becoming infected with HIV. 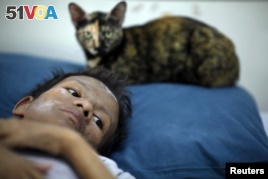 In this file photo, Samruei, a terminally ill Thai woman rests with her cat at a hospice for those dying of AIDS at a Buddhist temple Wat Prabat Nampu in Lop Buri.

Researchers said infections rates are rising in young people who sell sex for money and who use needles to put drugs into their bodies. Young men who have unprotected sex with other men are also increasingly infected with HIV.

Researchers said they want to tell these groups to be more careful about having sex. However, they say, it is becoming more difficult to communicate with young people.

But now, he says, many people can just use the Internet to find sexual partners. He says they are able to find these partners using apps on their smartphones.

Health workers say women who work in Thailand's prostitution centers are better-protected from HIV. Women in these centers understand how to avoid the virus. And they take steps to keep from getting infected.

However, the UNICEF study found that female sex workers in Thailand who are not Thai often cannot use the country's free health services. They also may not get important information about how to prevent HIV.

And another group of young women is at a higher risk of getting the virus: those who have sex for money but do not work all the time as sex workers. Mr. Gass says this group includes university students and young girls. He says they meet the people they will have sex with on the street or at bars.

He says they "really don't have the life skills and negotiating ability to ensure that the partners that they spend time with are using condoms."

Researchers estimate about 500,000 people in Thailand are living with HIV. At one time AIDS was the top killer in the country. Now the disease is number five. It is responsible for four percent of all deaths in Thailand.

This story was reported by VOA reporter Steve Herman in Bangkok. It was written for Learning English by Kelly Jean Kelly. It was edited by Christopher Cruise and narrated by Jim Tedder.

infect - v. to make sick with something that cause disease

virus - n. a kind of organism that causes disease

estimate - v. to form an opinion about a value, size or amout using lessthan complete information