Update Required To play the media you will need to either update your browser to a recent version or update your Flash plugin.
By Dan Novak
24 December 2021


Businesses around the country are creating complex and costly light shows to spread happiness this holiday season.

From Maine to California, more and more light shows have been set up during the coronavirus pandemic. They are more complex than ever, with many bright and sparkling lights.

"They're exploding because people are looking for something to do. That has been a boom for this business," said Wayne Wheeler. His company, Reindeers Incorporated, imports lights and other equipment used in the professionally produced shows. 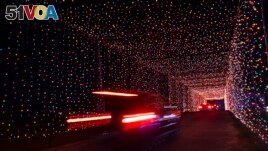 Passenger vehicles move through a tunnel of holiday lights at a display set up at the Cumberland Fair Grounds, Tuesday, Dec. 14, 2021, in Cumberland, Maine. (AP Photo/Robert F. Bukaty)

Lighting displays during the holidays have long been an American tradition. People often drive through neighborhoods to look at the colorful lights. The professional productions take it to another level, with hundreds of thousands of lights, synchronized music, animated props, and other lights.

The pandemic appears to have made light shows more popular in America. And commercial light shows have been showing up in fair grounds, farms, zoos, and parking lots, some in the industry said.

Enjoying outdoor lights on foot, or from inside a car, is a safe activity while COVID-19 infection numbers are rising. Ticketing is often done online, and tickets can be electronically confirmed through a car window.

E.J. Dean is the creator of the first "Maine Celebration of Lights" at the Cumberland Fair Grounds.

He said he created the event to keep his workers employed after the pandemic almost closed his business. His company provides park rides and games, all of which were canceled in 2020.

Inventor Thomas Edison is credited with creating the first string of lightbulbs in 1880. In 1923, U.S. President Calvin Coolidge started a new tradition by lighting the National Christmas Tree with 2,500 electric lights. The tradition started getting popular after that.

Most major cities have one or more light shows. Large events designed to be seen from cars are now popular.

The "Big Bright Light Show" in Rochester, Michigan, covers a big part of the town. The "Winter Light Spectacular" at the Lehigh Valley Zoo in Pennsylvania had performances for children by Disney characters. Both have more than 1 million lights.

Light shows are also becoming costly. For Texas-based Extreme Lightscapes, the average budget for a holiday light show with music is $500,000.

"Everybody continues to try to outdo each other in terms of size, scope, and technological complexity," said company head Darren Vader.

Such events are run by businesses, nonprofit organizations and cities.

Many of the operators, however, started with shows at their homes before deciding to get into the business, said Matt Reed. He is with Ewing Irrigation and Landscape Products. The Arizona-based business provides lights for companies and cities.

"You feel a difference when there's a lot of love behind the project," he said. "It's not just a job for them."

The Associated Press reported this story. Dan Novak adapted it for VOA Learning English. Mario Ritter, Jr. a was the editor.

sparkling — adj. shining with or reflecting bright points of light

synchronized — adj. to cause (things) to agree in time or to make (things) happen at the same time and speed

prop — n. an object that is used by a performer or actor or that is used to create a desired effect in a scene on a stage, in a movie

fair — n. a large public event at which there are various kinds of competitions, games, rides, and entertainment

character — n. a person or being who appears in a story, book, play, movie or television show

scope — n. the area that is included in or dealt with by something=