Hollywood Is Finally Getting Its Own Film Museum

Update Required To play the media you will need to either update your browser to a recent version or update your Flash plugin.
By Bryan Lynn
03 December, 2017


More than 90 years have passed since Hollywood's official film organization first proposed plans to build its own museum.

Those plans are finally becoming a reality, with the Academy Museum of Motion Pictures set to open in 2019.

The Academy of Motion Picture Arts and Sciences is building the museum. The organization presents the yearly Academy Awards ceremony, also called the Oscars.

The Academy includes more than 8,000 members, including actors, directors and other professionals in the film industry.

Museum officials say visitors will be able to "experience the magic of cinema" by learning about all parts of the film-making process. 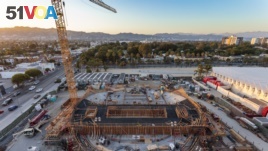 An aerial photo of the construction site of the $388 million Academy Museum of Motion Pictures scheduled to open in 2019.

The almost 27,000-square-meter complex is expected to cost $388 million to complete. The project is underway at the site of an historic Los Angeles department store built in 1939. The Los Angeles County Museum of Art has used the building since 1994.

The Academy Museum will include a 1,000-seat theater inside a huge addition with a rounded glass cover. This so-called "Sphere" will provide extended views of the Hollywood Hills.

Film historian Kerry Brougher has been named director of the museum. He told VOA the museum will open as Hollywood continues to seek new ways to entertainment audiences beyond the movie theater.

"Film is expanding," Brougher said. "It's in the theaters still, but it's also projected onto buildings. And it's also on your iPhone, it's on your computer." He added that movies often cross over into the art world too, with major exhibitions including film subjects.

Brougher says the museum will include areas showing the Academy's collection of 12 million photographs and 80,000 screenplays. The collection also includes props, costumes and other objects from famous films, such as "Casablanca," "Psycho" and "The Ten Commandments."

Special collections will also be shown from many film greats, such as Cary Grant, Katharine Hepburn and Alfred Hitchcock.

The Academy Museum will also feature Oscar statuettes donated by actors who won the awards. Brougher said the museum is designed to make visitors feel like they, too, are in a movie, with many interactive experiences.

"You won't necessarily know what's coming next," he added. "You'll be in environments sometimes that make you feel like you've gone back to the past – that you're in the era that you're actually exploring."

He added that visitors will even get the chance to walk down a red carpet and accept their own Academy Award.

Currently, Hollywood only has a few possibilities for visitors interested in seeing film-related places.

They can stroll the Walk of Fame, where actors are honored with stars on Hollywood sidewalks. They can also visit movie studios or see the Dolby Theater, where the Oscars are presented. But beyond these, movie fans have limited possibilities.

Eric Garcetti is the mayor of Los Angeles. He says the Academy Museum will provide visitors the chance to experience many different parts of the film industry all in one place.

"I think they wander around wondering where they can experience this great golden ticket to the movies," he said. "Now they'll have a place."

Garcetti noted the museum will also serve the hundreds of thousands of local people working in film-related businesses. He said they, too, will finally be able to visit a place that celebrates their own Hollywood movie industry.

Mike O'Sullivan reported this story for VOA News. Bryan Lynn adapted it for Learning English. Caty Weaver was the editor.

cinema – n. the art or business of making movies

sphere – n. a round object

project – v. cause to appear on a surface

exhibition – n. a display of objects such as works of art presented in a public space

screenplay – n. the written script for a movie

prop – n. an object used in a film or play

era – n. a period of time in history that is associated with a person, event, etc.

wander – v. walk slowly without having a particular purpose or direction