Hollywood Movies Come Back in 2021, But Will It Last?

Update Required To play the media you will need to either update your browser to a recent version or update your Flash plugin.
By Caty Weaver
31 December 2021

A year ago we reported about the "strong" opening of the movie Wonder Woman 1984. That movie received much praise and made about $17 million on its opening weekend. Sounds small for a Hollywood production, right? But in January 2021, it was considered quite a hit.

So much was still closed. 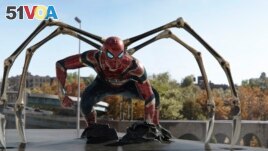 Twelve months later, the new coronavirus continues to create big problems for moviemaking, live theater and much more in the world of arts and culture. But, the industry also saw major recovery in 2021.

The latest in the Spiderman series, the movie was just released December 17. Theatergoers around the world have since spent a total of more than $1 billion dollars to see the film.

"The movie theater is probably going to come roaring back because we have a lot of really, really massive movies," Bahr said, naming projects including Avatar 2; Top Gun 2 and Black Panther 2.

"Hollywood is certainly delivering their big guns or are planning to in 2022," she added.

Steve Baltin is a podcaster and arts reporter for Forbes magazine. He said the two most interesting tours, or series of performances, of 2022 will be from music groups Rage Against the Machine and My Chemical Romance.

Rage Against the Machine had planned to tour in 2020 but postponed the shows because of the pandemic. Now the band is set to launch the tour in the spring of 2022 starting in El Paso, Texas.

But the public's interest in My Chemical Romance's tour is surprising, Baltin said. He compared the two bands.

"They (Rage Against the Machine) were already headlining festivals and arenas. My Chemical Romance never reached that point. They sold out 70,000 tickets in L.A.," he said.

But Baltin suggests spending your money on another performance for a better experience.

"If there's one show in 2022 that you would like, sell a kidney to be at, it's Elton John's final North American show at Dodger Stadium, in November of 2022. So, when you see something like that, that is just one of those shows that 25, 50 years from now, you're going to tell everybody you were at," he said.

The #EltonFarewellTour is to open in New Orleans, Louisiana, on January 22.

Of course, as the Omicron version of the new coronavirus continues to spread, film and music fans can only wait and hope the "show will go on" in the new year.

Caty Weaver wrote this story from materials including those of the Associated Press. Mario Ritter Jr. was the editor.

deliver –n. to provide or produce something that you said you would

festival –n. a special time or event when people gather to celebrate something

arena –n. a building for sports and other forms of entertainment that has a large central area surrounded by seats