Update Required To play the media you will need to either update your browser to a recent version or update your Flash plugin.
By Susan Shand
29 May 2020

But the worldwide coronavirus has changed even Hollywood: America's movie production center in California. Red carpets of the future might be very different – if the custom happens at all.

Photographers and fans stand along the red carpets, while celebrities stop to have their picture taken. It is a usual part of publicity efforts that come with a new film opening. But, social distancing may put a stop to it. 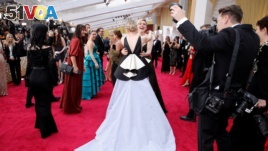 "Everybody is desperate to get back to a normal version, where we get to be with people in person," said one Hollywood publicist who asked not to be identified.

"I don't see it coming back fully until we've got some kind of vaccine," the publicist said.

A big test will come in July when Christopher Nolan's film "Tenet" for Warner Bros. and Walt Disney's "Mulan" are expected to open. They will be the first big movie releases since the new coronavirus closed movie theaters worldwide. Movie production companies delayed the opening of many films until the end of 2020 or even 2021. Warner Bros. and Disney have not announced their plans for the opening of the two movies.

Television's Emmy Awards usually take place in Los Angeles in September. Organizers have not said what they will do if social distancing measures are still in place.

In Los Angeles, there are companies that plan red carpet events, like 15|40 Productions. The business has planned more than 200 Hollywood movie openings. Now, it is talking with several movie companies about ways to add social distancing.

"We took the red carpet and we had to re-envision how it would work...keeping people apart," said Craig Waldman. He is president of 15|40 Productions.

Usually, TV cameras and photographers are in a small space together. Now, they will be separated by large, heavy pieces of plastic. Distance barriers will keep reporters at least 2 meters away from actors. Celebrities will not be able to talk to fans.

"Having a live fan element is going to be a thing for the future, once a vaccine is found," said Waldman.

That number of cameramen and photographers on the red carpet will have to be decreased, and everyone will wear face coverings.

The biggest unknown is whether important celebrities will attend these events.

Mike Zimet owns a New York security company. He works with people like actors Alec Baldwin and Lin-Manuel Miranda. He said tight security measures will need to be in place.

"I know one (celebrity) I'm protecting right now is staying away from everything," said Zimet. He expects red carpets to return in New York in autumn or possibly winter.

Zimet said celebrities "have to decide if your health, of the family and yourself, is worth it."

Publicists now are holding movie openings online and talking to actors on Zoom or Skype from their homes. This method has worked well for films with small budgets because it has cut travel costs. Actors appear to like it as well.

"It's more like chit-chatting with a sort of new friend they have just met on their computer," said one publicist.

But it lacks the excitement of a red carpet.

It "is quite, quite strange," British actress Kristin Scott Thomas said on Zoom from her home. She was discussing her new film "Military Wives."

"It's...a lot more comfortable because you're wearing your own dress," she said with a laugh.

celebrity– n. one who is famous from movies or television

red carpet– n. a carpet that is red and rolled out for an important person to walk along

desperate – adj. in a state of extreme panic

envision–v. to think ahead and imagine what something will look like

mask– n. a bit of clothe that covers the mouth and nose

comfortable– adj. at ease, not tense