Hollywood's Summer Movies: Something for Everyone

Update Required To play the media you will need to either update your browser to a recent version or update your Flash plugin.
By Caty Weaver
27 May 2022


It is Memorial Day weekend in the United States, a time many Americans consider the official start of summer. And that means the start of summer movie season, too!

The film industry in Hollywood, California, has produced some high-budget action films led by major movie stars that will open in the coming days and weeks. At least one is expected to be a blockbuster.

Top Gun: Maverick is a Paramount Pictures film starring Tom Cruise. It just opened May 27, after two years of pandemic postponements. Producer Jerry Bruckheimer said he never reconsidered his early decision to delay the film's release until movie theaters were open again. He said he thinks the film requires a big screen for full enjoyment. 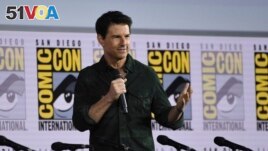 The filmmakers used a complex mix of camera equipment to get shots from high above the ground and inside military fighter airplanes.

"It's the kind of movie that embraces the experience of going to the theater. It takes you away. It transports you. We always say: We're in the transportation business. We transport you from one place to another, and that's what ‘Top Gun' does," Bruckheimer said.

The movie industry has already had several notable hits in the past six months too, including Spider-Man: No Way Home. The film is now the third-highest selling film of all time. The Batman, The Lost City and Everything Everywhere All At Once also saw considerable profits. Hollywood hopes the momentum will only increase in the coming months.

"We're still waiting for older audiences to come back. But it really feels like we've turned a corner," said Jim Orr, a top official with Universal Pictures.

Before the pandemic, the summer movie season could produce over $4 billion in admissions sales. That is about 40 percent of the year's total sales, reports Comscore media research company.

But in 2020, theaters were closed for the majority of the season and summer ticket sales fell sharply to $176 million. Last summer brought a clear improvement, with $1.7 billion in sales. But the total was still not close to normal earnings of the past. Many moviemakers chose to either delay releases further or to release films online.

Now, everyone is centered on theatrical releases. The ticketing service Fandango recently questioned more than 6,000 ticket-buyers. The company said 83 percent of people said they planned to see three or more movies in the theaters this summer. Streaming services may suffer. Netflix last month reported its first loss in streaming accounts in 10 years. It said it expects to lose 2 million accounts by summer's end.

Later in the summer, movie goers can see actor Chris Hemsworth's return as the lead in Marvel Cinematic Universe's Thor series. The third installment Thor: Love and Thunder comes out July 8. Hemsworth has played Thor from the series beginning in 2011. This time, however, Hemsworth also served as a top producer on the film.

Adam Aron also noted what he called "new film concepts" that open this summer, like actor-director Jordan Peele's movie, Nope. Like his other films, Peele combines science fiction and horror in a story of a community that witnesses a mysterious and powerful event. Nope is set for release July 22.

Paul Dergarabedian is the lead media expert for Comscore. He said the movie business this summer could reach the heights it saw in 2019.

On their own, Thor and other superhero movies cannot support a healthy or especially appealing film world, experts suggest. The industry needs to make different kinds of movies for theaters to survive.

"We have something for every audience," said Orr, the Universal Pictures official.

Universal's Easter Sunday tells a story about a large Filipino-American family that gathers to observe a major holiday. But some members do not get along and behave badly --- and humorously. The movie opens August 5.

If you are a book lover, several summer films may hold special appeal, like Where the Crawdads Sing from director Olivia Newman. The movie is based on the 2018 book of the same name by writer Delia Jones. It tells about a poor, uneducated girl, left by her parents to raise herself. The film is set in North Carolina in the 1950s and ‘60s, with Daisy Edgar-Jones starring as Kya.

Bullet Train, starring Brad Pitt and Sandra Bullock, is based on the Japanese book Maria Beetle by Kotaro Isaka. The movie is a thriller and a comedy about a trained killer who wants to get out of the assassination business. It will arrive in theaters August 5.

Many summer movies will be available on streaming services, too. But producer Jerry Bruckheimer suggests there is room for both online and theater presentation.

"It all depends on the movies. It's always about the movies. If there's stuff people want to see, they're going to show up," he said.

He added, "You have a kitchen in your apartment or home, but you like to go out to eat. You want a different meal."

screen – n. a flat surface on which a picture or series of pictures is shown

embrace – v. to take in or include as a part, item, or element of a more inclusive whole

momentum – n. strength or force gained by motion or by a series of events

audience – n. a group of listeners or watchers

ticketing – n. the act of selling tickets for admission to movie theaters and other entertainment places

streaming – n. the act, the process, or an instance of sending data or of accessing data that is being streamed

thriller – n. a work of fiction or drama designed to hold the interest by the use of a high degree of intrigue, adventure, or suspense