Update Required To play the media you will need to either update your browser to a recent version or update your Flash plugin.
By Caty Weaver
21 August 2020


Hollywood has been slow to get its cameras rolling again as California starts easing coronavirus restrictions.

Only a small number of movie and television (TV) productions have restarted filming in California and other parts of the United States. Actors and crew members are unsure when projects might restart filming, and some expect they will not return to work until 2021. 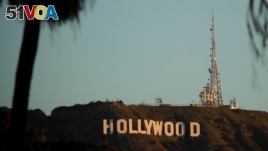 Los Angeles County is home to the biggest movie and TV production companies in the country. The local government gave approval in June for filming to begin with safety measures in place. Major labor unions released a 36-page report describing those safeguards. Producers had hoped to have many projects working again in August.

The number of filming permit requests in the Los Angeles area since mid-June was more than 60 percent lower compared to a normal year. Most of the requests were for advertising or still film images, reported local organization FilmLA. The group said it expected more television shows and movies to restart filming in September.

Actor Seth Rogen and his partner Evan Goldberg produce both TV shows and films. Rogen said he is exploring the idea of producing some projects overseas.

Speaking with a reporter this month, Rogen said he did not expect filming in America anytime soon in a way that he would accept.

"I look to other countries who have dealt with this whole thing much better and think maybe, if they'll let us in, maybe we can film there," he said.

A few big movies have restarted production in other countries. The next Jurassic World dinosaur film from Universal Pictures restarted filming in London. And Walt Disney Company is back at work in New Zealand, producing another film in the Avatar movie series.

To restart, producers must meet the industry's COVID-19 guidelines, which takes longer for bigger projects.

"It's not like flipping a light switch," said Duncan Crabtree-Ireland, chief operating officer and a top lawyer for the actors' union SAG-AFTRA.

The union has approved more than 1,000 return-to-work plans for film and TV projects, Crabtree-Ireland noted. He added that the current production level was "far lower" than normal.

Continuing shutdowns will limit the supply of fresh programming that television stations and online media services can offer.

"You want a ‘Boys' season three? They are not going to let us shoot [until] we get the numbers down," actor Jack Quaid said on the video.

Some TV series have taken steps to increase safety protections, including smaller crews, safety officers and some unusual fixes. For example, some producers are using mannequins for kissing scenes.

Producer Tyler Perry created a "Camp Quarantine" at his Georgia production studio to film his series Sistas in July. No coronavirus cases were reported during a two-week shoot, Perry said.

In the compounds, "we will control it, we'll test, but we'll also contain it and keep everyone as safe as possible," McCarthy said.

A few productions have reported coronavirus infections to SAG-AFTRA, Crabtree-Ireland said. He would not identify the productions. Some temporarily halted production, he said. Other cases involved people who had not yet reported for work.

"In our view, it's a sign the system is working," he said.

page – n. one side of a printed or written sheet of paper

flipping a light switch – expression to do something quickly and easily

shutdown – n. the act of stopping the operation or activity of a business, machine, etc., for a period of time or forever

mannequin – n. a figure shaped like a human body that is used for making or displaying clothes

scene – n. a part of a play, movie, story, etc., in which a particular action or activity occurs

studio – n. a place where motion pictures are made