Update Required To play the media you will need to either update your browser to a recent version or update your Flash plugin.
By Shelley Gollust
28 June, 2014

Today, we tell about "horse" expressions. In the past, many people depended on horses for transportation, farming and other kinds of work. A lot of people still like to ride horses. And horse racing is also popular. So it is not surprising that Americans still use expressions about the animals.

Long ago, people who were rich or important rode horses that were very tall. Today, if a girl acts like she is better than everyone else, you might say she should "get off her high horse."

Yesterday, my children wanted me to take them to the playground. But I had to finish my work, so I told them to "hold your horses" -- wait until I finish what I am doing. My two boys like to compete against each other and play in a violent way. I always tell them to stop "horsing around" or someone could get hurt. 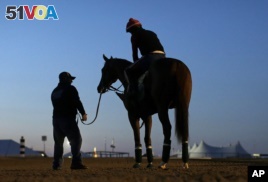 Assistant trainer Alan Sherman, left, stands Kentucky Derby winner California Chrome, with exercise rider Willie Delgado, May 17, 2014.
We live in a small town. It does not have any exciting activities to offer visitors. My children call it a "one-horse town."

Last night, I got a telephone call while I was watching my favorite television show. I decided not to answer it because "wild horses could not drag me away" from the television -- there was nothing that could stop me from doing what I wanted to do.

You may have heard this expression: "You can lead a horse to water, but you cannot make him drink." That means you can give someone advice but you cannot force him to do something he does not want to do.

Sometimes a person fights a battle that has been decided or keeps arguing a question that has been settled. We say this is like "beating a dead horse."

In politics, a "dark-horse candidate" is someone who is not well known to the public. Sometimes, a dark horse unexpectedly wins an election.

Another piece of advice is "do not change horses in midstream." You would not want to get off one horse and on to another in the middle of a river. Or make major changes in an activity that has already begun. In the past, this expression was used as an argument to re-elect a president, especially during a time when the country was at war.

This VOA Special English program was written by Shelley Gollust. I'm Faith Lapidus. You can find more Words and Their Stories at our website, 51voa.com.
Related Articles
go top