Update Required To play the media you will need to either update your browser to a recent version or update your Flash plugin.
By Anna Matteo
17 October, 2016

Next time you make yourself a hot cup of tea or coffee, you might want to let it cool down a bit before drinking.

Researchers say letting your hot drinks cool off could help you avoid some kinds of cancer. 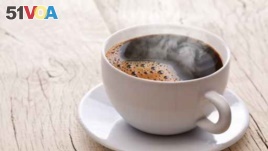 Whether you are a coffee or tea drinker, let it cool a bit before enjoying!

In fact, the United Nations' cancer research agency decided to list hot drinks with lead, gasoline and exhaust fumes as "possibly carcinogenic." In other words, each one could cause cancer.

The International Agency for Research on Cancer (IARC) is part of the World Health Organization (WHO). The IARC published the findings in the medical journal Lancet Oncology.

Researchers at IARC found evidence that drinks at temperatures above 65 degrees Celsius, when swallowed, can cause cancer of the esophagus.

The researchers examined findings from other studies where tea and coffee were often served at 70 degrees Celsius or above. Those studies were completed in Iran, China and South America.

In developed countries, health experts have linked esophageal cancer to smoking and alcoholic drinks. However, this form of cancer is more common in areas where people drink beverages at very high temperatures.

In Europe and the United States, many people drink coffee and tea at temperatures around 60 degrees Celsius. And they often add milk which lowers the temperature considerably.

However, tea-drinkers in Iran and maté-drinkers in South America often enjoy their beverages at closer to 70 degrees Celsius. Maté is a tea-like brew made by steeping the leaves of the yerba mate plant in near-boiling water.

The researchers note that South Americans not only drink their maté very hot, they also drink it through a metal straw. This sends the scalding liquid directly into the throat.

The findings, however, are good news for coffee drinkers.

In 1991, the World Health Organization listed coffee as "possibly carcinogenic." WHO officials have since changed their position on that listing. They now suggest that the temperature of your hot drink is a greater risk factor than the actual drink itself.

Christopher Wild is the director of the IARC. When he spoke with the AFP news agency, he said the results "suggest that drinking very hot beverages is one probable cause of esophageal cancer and that it is the temperature, rather than the drinks themselves, that appears to be responsible."

But how common is esophageal cancer? Worldwide, it is the eighth most common cancer. Cancer of the esophagus killed about 400,000 people in 2012.

Anna Matteo adapted this story for Learning English. George Grow was the editor.

beverage – n. something you can drink : a liquid for drinking

steep – v. to soak in a liquid at a temperature under the boiling point (as for softening, bleaching, or extracting an essence)

gasoline – n. a liquid made from petroleum and used especially as a fuel for engines

exhaust fumes – n. the mixture of gases produced by an engine

carcinogenic – adj. medical : a substance that can cause cancer

esophageal – adj. medical : the tube that leads from the mouth through the throat to the stomach