Update Required To play the media you will need to either update your browser to a recent version or update your Flash plugin.
By Bryan Lynn
18 September 2022


Some women visiting hotels in Tunisia are criticizing policies that ban a kind of swimwear known as a burkini.

The burkini is a piece of clothing used for swimming that covers the entire body except for the face, hands and feet. It is worn by some Muslim women who wish to demonstrate modesty. Burkinis are commonly seen on beaches across Tunisia.

But numerous larger hotels in coastal towns have banned the swimwear from their pools. The policy shows a lasting European influence in the country. It is also evidence of divisions that exist between secular and conservative Tunisians. 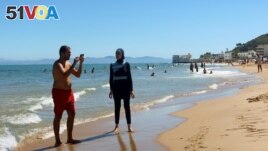 A woman, wearing a full-body burkini swimsuit, stands at a beach in La Marsa near Tunis, Tunisia September 11, 2022. (REUTERS/Jihed Abidellaoui)

On the website Tunisiabooking.com, at least 20 hotels advertise that the burkini is banned at their hotel, Reuters news agency reports.

Jannette Mensi recently stayed at the Marriott Hotel in the city of Sousse. She said hotel employees told her that because she was wearing a burkini, she had to get out of the main swimming pool and go to another one in the back. That pool is generally used by children.

She told Reuters that, as a Muslim woman, she felt the hotel was discriminating against her.

"I respect, I accept next to me a lady with a bikini, or someone drinking wine... I respect them, they should respect me," she said.

The Marriott hotel worker did not explain the reasons behind the ban. But Mensi has her own theory for the policy. "I told them: you are colonized from then until now," she said.

A Reuters reporter asked Marriott representatives about the incident involving Mensi. A spokesperson for the Sousse Pearl Marriott Resort & Spa apologized for what had happened. The spokesperson said the hotel would start permitting all adult visitors to use the main pool "no matter the swimwear they choose."

Burkini bans at Tunisian hotels date back to the 2000s and became more common after the 2011 revolution. At that time, more women started wearing the Muslim head covering called a hijab. The hijab was banned in the workplace during the 23-year rule of the country's ousted leader, Zine el Abidine Ben Ali.

The managing director of a 4-star hotel in the popular beach resort of Hammamet spoke to Reuters about the issue. The individual, who did not want to be named, said he banned the swimwear in 2008 following complaints from visitors.

"The last people I spoke to said that it is disgusting to swim in a pool with burkinis," the hotel managing director told Reuters.

The burkini bans have also been criticized online. In a widely shared TikTok video earlier this year, Emirati influencer Zainab Alsawalhi denounced the burkini-free Movenpick Hotel in Sousse for "discrimination and hate."

The Accor group, which owns Movenpick, did not answer questions sent by Reuters seeking a reaction to the criticism.

modesty – n. being conservative in the way one dresses

secular – adj. not religious or controlled by a religious group

wine – n. an alcoholic drink made from grapes

complaint – n. a statement that something is wrong or not satisfactory