Update Required To play the media you will need to either update your browser to a recent version or update your Flash plugin.
By Bryan Lynn
03 January, 2017


Republican lawmakers in the United States Congress have suspended plans to weaken an office that investigates possible ethics violations.

At a closed-door meeting Monday night, Republican members of the House of Representatives had voted 119 to 74 to approve the proposal. The vote came hours before all House members were sworn-in to two-year terms in the new Congress.

The change would have put the Office of Congressional Ethics under the House Ethics Committee, which is controlled by lawmakers. In the 2016 election, Republicans kept control of both the House and Senate.

The measure, proposed by Republican Congressman Bob Goodlatte, was added to a larger number of rules for Congress. But it was later dropped.

The Office of Congressional Ethics was created as a non-partisan, independent group in 2008. It came about after several corruption cases involving members of the House.

Under the proposed change, lawmakers themselves would have had final say over activities of the Office of Congressional Ethics. 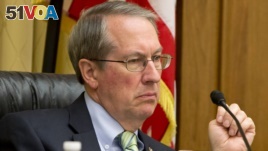 Goodlatte said his proposal was needed because he believed some lawmakers had been unfairly targeted by the office. House Speaker Paul Ryan and Majority Leader Kevin McCarthy both opposed the change.

President-elect Trump has often used the expression "drain the swamp." A swamp is a wet, muddy area. Trump has used the term to describe efforts to end corruption in government and politics.

On Tuesday, Trump criticized the ethics proposal action on Twitter. "With all that Congress has to work on, do they really have to make the weakening of the Independent Ethics Watchdog, as unfair as it may be, their number one act and priority," he wrote.

Trump said U.S. lawmakers should instead "focus on tax reform, healthcare and so many other things of far greater importance!" He also urged Congress to join his effort to "drain the swamp."

"Republicans claim they want to 'drain the swamp,'" Pelosi said in a statement. "But the night before the new Congress gets sworn in, the House GOP has eliminated the only independent ethics oversight of their actions." The vote meant that ethics had become "the first casualty" of the new Republican Congress, she added.

Democratic Senator Elizabeth Warren said House Republicans were "gutting its ethics office in the middle of the night."

In an earlier statement, Goodlatte said his proposal was designed to "strengthen the mission of the Office of Congressional Ethics." In addition, he said it would improve due process rights for individuals under investigation, as well as witnesses called to give evidence.

Under the proposed rules, the Office of Congressional Ethics would have been barred from "accepting or considering any anonymous allegation." Also, it would not have been permitted to investigate any reported violation that happened before 2011.

Lawmakers would have also been barred from making any public statement or releasing information to the public unless the material was released by the Ethics Committee.

Chris Hannas wrote this story for VOANews. Bryan Lynn adapted his report for Learning English, with additional material from the Associated Press and Reuters. George Grow was the editor.

ethics – n. rules of behavior relating to what is morally right and wrong

watchdog – n. organization that makes sure governments or companies are not doing wrong or illegal things

casualty – n. something badly affected by something that happens

gut – n. destroy or make something no longer effective

due process – n. the official and proper way of handling legal matters

anonymous – adj. not giving a name