How a Boy Helps Scientists Learn about Autism

Update Required To play the media you will need to either update your browser to a recent version or update your Flash plugin.
By Anna Matteo
24 January 2022

As a 16-year-old boy looked closely at a mouse, it ran around an enclosed area in a laboratory. "Hi, Jakob 1. I'm Jake." 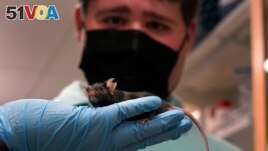 A research assistant holds up a mouse for Jake Litvag to see. The 16-year-old visited the lab at Washington University in St. Louis. Doctors there are using the mice and Jake's genes to study a rare form of autism, December 15, 2021. (AP Photo/Jeff Roberson)

Jake Litvag named the mouse, but they share more than just names. Scientists genetically engineered Jakob, the mouse, to be similar to Jake in one important genetic way.

That mouse and its relatives are the first in the world to have the same missing gene that scientists say may cause Jake's condition -- autism.

Scientists at Washington University in St. Louis raised the mice from stem cells that came from Jake's blood. They wanted to study his condition.

Jake's parents, Joe and Lisa Litvag, visited the laboratory back in December 2021. They thought that meeting the scientists – and the mice – would help Jake understand his important part in the research. He now considers autism something to be proud of rather than something that makes him different from others.

"Oh wow. Cool!" Jake said as he watched the research mice. Walking out of the lab, Lisa Litvag cried as she thought about her son's cells helping others.

After meeting the mice, the family visited another lab, where Jake looked through a microscope at his own stem cells.

"That's me! That's cool stuff. I never saw anything like that in my life," Jake said, as his dad pulled him close.

Jake's father Joe Litvag told the Associated Press that he and his family are "deeply proud" to be part of the research. He added, "What do we live this life for? It's ultimately to try to -- in one way, shape or form -- be of service to others."

Autism starts in childhood and leads to problems forming relationships and communicating with others. Autism disorders include a large group of conditions. The abilities and needs of people with autism can also be very different. Some people with autism can live independently. Others have severe disabilities and require life-long care and support.

The AP reports that one in 44 children in the United States has an autism spectrum disorder (ASD). On its website, the World Health Organization says that worldwide that number is about one in 160 children.

The Litvags saw early on that Jake was not developing the same as other children. He could not walk without help until he was four. He struggled to speak complete sentences in first grade.

At first, no one knew why. Jake had a mix of different qualities. He had difficulty calming down and controlling his reactions. But he was also social and funny. He was five years old when doctors said he had autism. Then, the Litvags heard that an expert on the genetics of autism was giving a talk at the Saint Louis Science Center. There, they met Dr. John Constantino who began seeing Jake as a patient.

About five years later, Constantino proposed genetic testing. The testing found the missing copy of the MYT1L gene. This gene is believed to cause one out of every 10,000 to 50,000 autism cases.

The finding brought the family peace. They had heard that autism had other causes, like difficulties during birth. Lisa Litvag said, "For a long time, I thought it was something that I did."

Joe Litvag said that his family came to understand that they did not do anything wrong. "It's just that people are born all the time" with genetic differences, he said.

A large multinational study that appeared in JAMA Psychiatry in 2019 estimated that up to 80 percent of the risk for autism comes from genetics.

Jake's mother said she never wanted her son to feel badly about his condition. She added that the family continues to support the idea that, because of his autism, he has important gifts to share.

When Constantino suggested studying the MYT1L gene, the Litvags happily agreed. To start the research, Jake's family raised about $70,000 from family and friends. Scientists then were able to turn that money into $4 million in research aid from the National Institutes of Health.

Researcher Kristen Kroll and her team reprogrammed cells from Jake's blood into stem cells. These special cells can create different kinds of cells in the body. Scientist Joseph Dougherty and his team used Jake's genetic information. They reproduced Jake's genetic mutation in the mice. To do this, they used the gene-editing tool CRISPR.

Since starting the research about three years ago, scientists have raised around 100 mice with Jake's mutation. They are now using the great-great grandchildren of the first mouse they engineered. They recently published their research with mice in Neuron.

A gift in return

Dougherty and his team said they hope their research on MYT1L will lead to treatments to improve or correct the problems the mutation causes.

They are sharing their findings with scientists studying other genes related to autism. They are also trying to discover how different genes work together to cause the condition.

The Simons Foundation Autism Research Initiative says that more than 100 genes have strong evidence linking them to autism. It also says there are several hundred more genes thought to be linked.

Dougherty said understanding autism will require finding one or two things shared across different forms of the disorder. These could be targets for treatment. Although not everyone with autism wants treatment, Dougherty said it could help those who do.

Since the research began, Dougherty has been writing notes to the Litvags explaining the latest discoveries. But as a scientist, he is mostly removed from the people behind the research.

When the Litvag family visited the lab last December, Dougherty wanted to share some news in person. The missing gene does not seem to shorten life. The mice live two to three years, the same as their brothers and sisters.

"Yes," Dougherty answered. As far as the researchers can see, the mice with Jake's genes live as long as the others.

In St. Louis, Laura Ungar reported this story for the Associated Press. Anna Matteo adapted it for VOA Learning English.

stem cell –n. a simple cell in the body that is able to develop into any one of many different kinds of cells (such as blood cells, skin cells, or other cells)

ultimately –adv. at the end of a process or period

proud –adj. very happy and pleased because of something you have done or something that you have