Update Required To play the media you will need to either update your browser to a recent version or update your Flash plugin.
By Susan Shand
07 December, 2018


Cat lovers know that the animals spend a lot of time cleaning themselves. Cats use their tongues to remove dirt from their fur and smooth out their hair.

Scientists are now learning how the rough, sandpaper-like surface of cats' tongues helps the animals get clean and stay cool.

The secret: small hooks that stand up on the tongue — with scoops, small rounded areas, built in to carry saliva deep into all that hair. 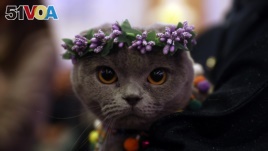 A cat is presented during "the "3rd International Pursaklar Cat Beauty Fest", on October 14, 2018 in Ankara.

A team of mechanical engineers reported the findings this month. They said their discoveries are more than unusual, and could lead to inventions for people.

A cat's tongue could help people put liquids or medicine on hairy skin, said lead researcher Alexis Noel of the Georgia Institute of Technology. Noel is seeking property rights for a three-dimensional printed tool that acts like the tongue.

Cats spend up to 25 percent of their waking hours cleaning themselves. Noel said she became interested in the subject when her cat, Murphy, struggled to free his tongue from a soft blanket. Scientists had always thought that the tongue was rough because it had small, uneven bumps. Noel wondered why.

First, computed tomography (CT) images of cats' tongues showed they are not raised areas, but small hooks with scoops at the end. The hooks are flat, but when cats need them for self-cleaning, they stand up, Noel explains. The scientific name for them is papillae.

The Georgia Tech researcher found that the papillae take in liquid. A housecat has nearly 300 papillae that hold a small amount of saliva that is released when the tongue presses on fur.

Next she examined the tongues of other cats in the species, like lions.

Papillae were only a little longer in lions than in cats, noted Noel and David Hu, an associate professor at Georgia Tech. Their findings were published in Proceedings of the National Academy of Sciences.

Next, Noel measured cat fur, which holds a lot of air to keep the animal warm. When the fur is pushed down flat against the cat's skin, the distance is the same as the length of the papillae, she discovered. The one exception was the fur of long-haired Persian cats.

fur – n. the hairy coat of an animal, especially when the hair is soft and thick

hook – n. a rounded or bent tool for catching, holding, or pulling something

scoop – n. a rounded object used to lift something in one quick, continuous motion

saliva - n. the liquid produced in your mouth that keeps your mouth moist and makes it easier to swallow food

dimensional – adj. relating to something with height, width and depth

bump – n. a small raised area on a surface

computed tomography – n. a method of producing a three-dimensional image of a body with computer technology