How America Elects Its President

Update Required To play the media you will need to either update your browser to a recent version or update your Flash plugin.
By Bruce Alpert
16 May, 2016

The report from Quinnipiac University was considered important news, even though it described voter opinions in just three of the 50 U.S. states. The reason? Because how people vote in those three states could decide who becomes president.

"The American presidential election is now centered on a shrinking number of battleground states to decide the winner," said Eric Ostermeier, a political scientist at the University of Minnesota.

These battleground states are also called "swing states," meaning that sometimes their voters choose a Democratic candidate and sometimes a Republican.

The media focus so much on these states because of how Americans elect their president.

Americans go the polls to vote for president on November 8, but the candidate with the most votes does not automatically win. The winner is decided by the 538 members of the Electoral College.

The Electoral College does not have any students or teachers. Instead, it is a group of people who represent their states in the U.S. presidential contest.

Each state has the same number of members in the Electoral College that they have representatives in Congress. That number is decided by the state's population. 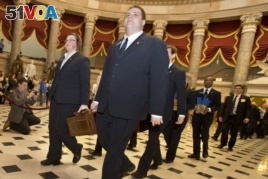 Pages lead a Senate procession carrying two boxes holding Electoral College votes through Statuary Hall to the House Chamber on Capitol Hill on Capitol Hill in Washington, Friday, Jan. 4, 2013, for the counting of the votes

States with the smallest number, including Alaska and Vermont, have three members of the Electoral College. The state with the largest number, California, has 55.

In all but two states, whether they win by 1 percent or 20 percent, candidates still get the same number of Electoral College votes.

How the Electoral College affects campaigns

The Electoral College system means that Donald Trump, the likely Republican candidate, and Hillary Clinton, the likely Democratic candidate, will not campaign in states where they think they already know who will win.

For example, Donald Trump will probably take Alaska, Idaho, and seven other states. Republicans presidential candidates there have won every election since 1968.

Hillary Clinton will probably carry Minnesota, New York, and the other six states that voted for every Democratic presidential candidate since 1988. None is more important than Ohio. That state has voted for every winning presidential candidate since 1964.

As a result, Ohio receives a lot of attention.

Congresswoman Marcy Kaptur, a Democrat, has represented the Ohio city of Toledo since 1983. She talked about what it is like in Ohio a few weeks before a presidential election day.

"We get a barrage of television ads, radio ads, phone calls, people knocking on our doors, and lots of people coming to our state from other parts of the country to campaign for their candidate," Kaptur told VOA.

David Cohen is a political science professor at the University of Akron. He and other researchers found that the 2012 presidential candidates visited Ohio more than any other state. But other states, including the largest, California and New York, get "almost completely ignored," Cohen said.

The end of the Electoral College?

Because campaigns treat the states so differently, some people argue to end the Electoral College. They want the U.S. to elect its president based on the candidate who earns the most votes across the country.

"Voters currently living and voting in a red (Republican) or blue (Democratic) state are disenfranchised, because their vote doesn't matter," read a petition on the Moveon.org website.

But changing the American system to a popular vote would require changing the U.S. Constitution. That process is not easy.

Norm Ornstein, the American Enterprise Institute expert, points out that changing to a popular vote would also take away a reason for candidates to campaign in smaller states.

And he worries that all 50 states would fight to recount their votes in a close election. 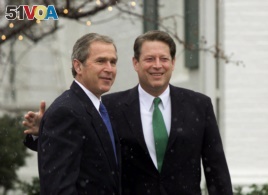 One such recount happened in Florida in 2000. The media first reported that Democrat Al Gore won the race there. Then, reporters said that Republican George W. Bush won. Later, they said the vote was too close to call.

Florida officials spent several weeks recounting the votes. The U.S. Supreme Court made a 5-4 decision to stop the recount.

In the end, Florida's Electoral College votes went to Bush. Those votes were enough to give him the presidency over Democrat Gore, though Gore won 500,000 more votes nationally than Bush.

The 2000 election was one of only four U.S. elections when the Electoral Vote did not match the popular vote. The other times happened in the 1800s.

In one contest, neither candidate earned the required number of Electoral College votes. The House of Representatives chose the winner.

In the other two contests, one candidate was very popular with voters in a few states. But he lost to the candidate with more national appeal.

barrage – n. a great amount of something that comes quickly and continuously

knock – v. to hit something (such as a door) with the knuckles of your hand or with a hard object

disenfranchise – v. to prevent a person or group of people from having the right to vote